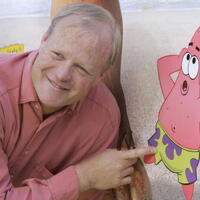 Bill Fagerbakke Net Worth: Bill Fagerbakke is an American actor and voice actor who has a net worth of $10 million. Bill Fagerbakke was born in October of 1957 and is most known for his television and film roles, including those which are voice based. Most notably, as Michael "Dauber" Dybinski on the long-running sitcom, Coach and Patrick Star on Nickelodeon's cartoon, SpongeBob SquarePants. He also had a recurring guest role on the cult classic sitcom, How I Met Your Mother, as one of the main character's fathers, Marvin Eriksen. At 6'6″ he is known for his ample height, which he also used as a high school athlete, participating in football, basketball, and track. He even went on to play football in college, for which he received a scholarship. After taking a "redshirt" year and later an injury, he is said to describe his college career as "two years of football and four years of school." After graduating in 1981, he went on to start acting professionally in 1984. Here he started taking on various roles in television and films. He married actress Catherine McClenahan in 1989, with whom he has two children, Hannah and Carson. He and McClenahan have been separated since 2012.