Betsy Brandt net worth and salary: Betsy Brandt is an American actress who has a net worth of $4 million. She is best known for her role as "Marie Schrader" in the hit series Breaking Bad, but she has appeared in over 30 films and television series since she began her on-screen career in the 90s.

Betsy Brandt was born in Bay City, Michigan in 1973. She received a Bachelor of Fine Arts in Acting from the University of Illinois at Urbana-Champaign. She studied theater at Harvard University's Institute for Advanced Theater Training and also attended the Royal Scottish Academy of Music and Drama in Glagow. She started her career on stage working with the Arizona Theatre Company and eventually began getting guest roles on television shows like Without a Trace, Judging Amy, ER, Boston Legal, The Practice, and NCIS. She began working on the AMC drama series, Breaking Bad, in 2008 and remained with the cast until its final episode in 2013. In addition to her work on Breaking Bad she was also cast as "Sandy" in the hit show Parenthood, and also as "Annie Henry on The Michael J Fox Show, which premiered in September of 2013. In 2014, Betsy Brandt was cast as one of the lead characters in the ABC series Members Only. In the same year she appeared in seven episodes of Masters of Sex. From 2015 to 2019 she was a series regular on the CBS show Life in Pieces. She currently lives in Los Angeles with her husband, Grady Olsen, and the couple have two children. 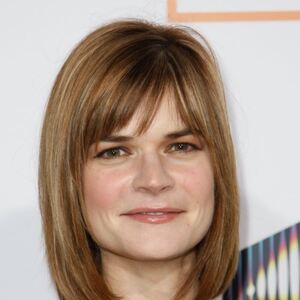