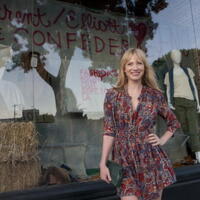 Beth Riesgraf net worth and salary: Beth Riesgraf is an American actress who has a net worth of $3 million dollars. Beth Riesgraf was born in Belle Plaine, Minnesota, and graduated from Cimmaron-Memorial High School in Las Vegas, Nevada. She began her professional acting career in the late 90s, appearing on the show, "Undressed". From there, she went on to steady work in film and television projects, including "The Summer of My Deflowering", "Spin City", "Scorcher", "I Love Your Work", "The Stereo Sound Agency", "How I Met Your Mother", "My Name is Earl", "Alvin and the Chipmunks", "Big Shot", "Without a Trace", "Struck", "Nobody", "NCIS", "Criminal Minds", "The Surgeon General", "The Mentalist", "Perception", and "Killer Women". She also appeared in the music video for "Cath…" by Death Cab for Cutie. She is most widely recognized for her work as Parker on the hit series, "Leverage". She was a main cast member on the show during its entire run from 2008 to 2012. She received three Saturn Award nominations for her work on the show. Beth Riesgraf dated her "My Name is Earl" co-star Jason Lee from 2000 to 2007. They have one child together, a son named Pilot Inspektor Riesgraf-Lee, who was born in September 2003.