Beth Behrs net worth and salary: Beth Behrs is an American actress who has a net worth of $20 million dollars. Beth Behrs was born in Lancaster, Pennsylvania in 1985. She is probably best known for her role as Caroline Channing on the hit CBS comedy "2 Broke Girls which originally ran on CBS from 2011 to 2017 and is now seen in syndication.

Beth Behrs was born on December 26, 1985. She got her start in acting at the young age of four and moved to the Bay Area as a teen where she began training as a signer with the American Conservatory Theater. She graduated from UCLA with a critical studies degree after starring in several school theater productions. Behrs landed her first role in 2009 on "American Pie Presents: The Book of Love" and has also appeared on "NCIS: Los Angeles", "Pretty Tough", "Adventures of Serial Buddies" and "Route 30, Too!". She also lent her voice to college student Carrie in "Monsters University" before landing the role of Caroline on "2 Broke Girls". Behrs was chosen to host the People's Choice Awards in 2014 along with co-star Kat Dennings.

Syndication Royalties: 2 Broke Girls ran from 2011 to 2017. During its run, the show produced 138 episodes over six seasons. In June 2012 the series was first sold into syndication for what was a then-record $1.7 million per-episode fee. TBS won the rights after outbidding several other networks. The previous per-episode record was $1.5 million that "Modern Family" earned in 2010 from USA. By the time 2 Broke Girls ended its run, it had aired 138 episodes. At $1.7 million per episode, TBS forked over $235.6 million for rights to the first syndication run. Those rights will come up for renewal again after roughly a decade. As the stars of the show, Beth and Kat Dennings earned $150,000 per episode a piece. That's around $20 million over the course of the series. They also a small number of equity points on the show which entitles them each to a percent of the show's syndication profits. Over the lifetime of the show's syndication run, Kat and Beth will each earn around $50 million in syndication royalties from the series. Show co-creator Whitney Cummings will likely earn roughly the same amount. 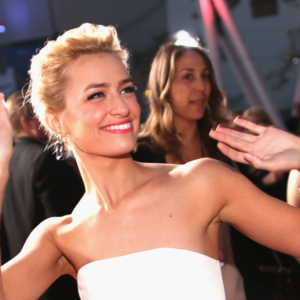