Benicio del Toro Net Worth and Salary: Benicio del Toro is a Puerto Rican-born actor and film producer who has a net worth of $45 million. After arriving on the scene with a memorable performance in the film "The Usual Suspects" in 1995, del Toro has established himself as one of Hollywood's most recognizable actors. Over the course of his career, he has won widespread critical acclaim for a number of roles.

In the past, Benicio has won an Academy Award, a BAFTA Award, a Golden Globe Award, a Screen Actors Guild Award, and many other honors and accolades. He gained particularly strong reviews for his roles in movies like "Traffic" and "21 Grams." Benicio del Toro is known for his incredible versatility. He has portrayed the historical figure of Che Guevera, numerous criminal characters, Star Wars heroes, figures from the Marvel Cinematic Universe, and many more.

Early Life: Benicio Monserrate Rafael del Toro Sánchez was born on February 19th of 1967 in San Germán, Puerto Rico. Raised in a Roman Catholic household alongside an older brother by two lawyers, Benicio was raised primarily in the barrio of Santurce in San Juan. During his childhood, he earned the nicknames "Beno" and "Skinny Benny." After attending Catholic schools in Puerto Rico, Benicio and his family relocated to Mercersburg, Pennsylvania – six years after his mother had passed away from hepatitis.

After graduating from high school, Benicio attended the University of California, where he first studied drama as an elective. Del Toro quickly proved that he had natural talents as an actor, and this prompted him to drop out of college and study under renowned acting teachers like Stella Adler and Arthur Mendoza. During this period, Benicio also became involved with the Circle in the Square Theatre School in New York City.

Career: Throughout the 80s, del Toro was mostly typecast as criminals and drug dealers in small TV roles. Some of his earliest appearances were on shows like "Miami Vice" and "Drug Wars: The Camarena Story." He gained slightly more notoriety towards the end of the 80s, and his film debut came in 1988 with "Big Top Pee-wee." Next year, he became the youngest-ever actor to play a Bond villain in "License to Kill," at 21 years of age.

In the 90s, Benicio del Toro began to establish himself as a film actor, taking roles in movies such as "The Indian Runner," "China Moon," "Christopher Columbus: The Discovery," "Money For Nothing," "Fearless," and "Swimming with Sharks." Although these roles helped advance Benicio's career, they paled in comparison to his next booking. In 1995, he gave a breakout performance in "The Usual Suspects," playing a mumbling, incoherent criminal called Fred Fenster.

Critics were quick to heap praise upon del Toro for this role, and he won an Independent Spirit Award for Best Supporting Male. With his presence in Hollywood firmly established, Benicio went on to book more central roles in films like "The Funeral" and "Basquiat." He also joined Robert De Niro in the thriller "The Fan," playing a Puerto Rican baseball star. In 1997, del Toro followed up with "Excessive Baggage," joining a cast that also featured Alicia Silverstone.

In 1998, del Toro gained a whopping 40 pounds to play Dr. Gonzo in the cult classic film "Fear and Loathing in Las Vegas." This surrealist performance paved the way for a growing fanbase for the actor. In 2000, he starred in "The Way of the Gun." However, that year was dominated by his performance in "Traffic," in which he played a Mexican policeman who was struggling to uphold justice amidst widespread corruption. He spoke most of his lines in Spanish and won an Academy Award for Best Supporting Actor. Benicio was also honored with a Golden Globe Award and a Screen Actors Guild award for this performance. In addition, "Traffic" proved to be a box office success.

Not long after this achievement, del Toro displayed his stunning versatility by switching gears and adopting a more comedic role in the British flick "Snatch," which saw him play the role of "Franky Four Fingers." After appearing in "The Pledge" and "The Hunted," Benicio starred in "21 Grams." This latter film would also prove to be a major source of critical praise, and Benicio was nominated for another Oscar. Throughout the next period, del Toro starred in films like "Sin City" and "Things We Lost in the Fire."

In 2008, Benicio won the Best Actor Award at the Cannes Film Festival for his portrayal of the communist revolutionary figure Che Guevera in two films collectively known as "Che." In 2010, del Toro produced and starred in the film "The Wolf Man." In 2013, Benicio joined the Marvel Cinematic Universe for the first time, playing the role of The Collector in the film "Thor: The Dark World." This film raked in over $644 million at the box office. He reprised this role once again in "Guardians of the Galaxy," a 2014 film that grossed over $772 million. Benicio played The Collector for the third time in "Avengers: Infinity War," which generated $2.048 billion at the box office after it was released in 2018.

In 2015, del Toro returned to his crime movie roots with "Sicario." The film was a critical and financial success, and critics once again applauded Benicio's performance. In 2018, he reprised his role in the film's sequel, "Sicaro: Day of the Soldado." One year prior, he had appeared in "Star Wars: The Last Jedi."

Relationships: In 2011, Benicio announced through his publicist that he was expecting a child. The mother of this child is Kimberly Stewart, although she and del Toro were never in a serious relationship. Their child was born later in 2011, and Stewart and del Toro had the baby baptized in Puerto Rico. 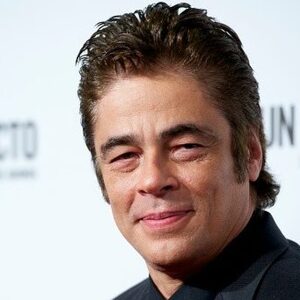