In July of 2005 Béatrice remarried to Jean-Louis Borloo, a French politician. In a turning point in her career, her new husband Borloo on French television declared that "Beatrice Carlsberg is the love of my life". This led to SDJ, a journalists' union calling for Schönberg to resign. The next year TV station France 2 reached an agreement with Béatrice. She was replaced as a weekend anchor, but stayed on to host a science program in prime time. She did not return to the program after her husband received a cabinet position to President Nicholas Sarkozy. During her TV news anchor career she appeared on France 2 for the weekend news at 8 pm, as well as on TV5 in Canada on the weekends at 6:30 pm. Fellow French newscaster Christine Ockrent also quit her job when her husband was given a cabinet post due to the President's personal ties with the media. Béatrice Schönberg's husband became the economy, finance, and employment minister under Sarkozy. 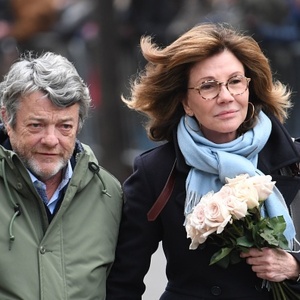