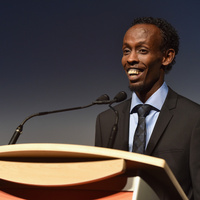 Barkhad Abdi net worth and salary: Barkhad Abdi is a Somali-American actor who has a net worth of $100 thousand dollars. Barkhad Abdi was born in Mogadishu, Somalia, and grew up in Yemen. In the late 90s, when he was in his early teens, his family relocated to Minneapolis, Minnesota when Somolia broke out in a very violent civil war. Barkhad went on to graduate from Minnesota State University and then worked as a limo driver, a disc jockey, and as a store clerk for a cell phone company owned by his brother. In 2013, Barkhad made his professional on-camera debut in the film, "Captain Phillips" opposite Tom Hanks. His work in the film earned him widespread notice, and he has been nominated for and/or won 31 major film awards, including the BAFTA Award for Best Actor in a Supporting Role and a Golden Globe Award for Best Supporting Actor. He has also been nominated for an Academy Award for Best Supporting Actor. In March 2014, Barkhad Abdi revealed that he was paid $66,500 for his work in Captain Phillips. He was also given a minor bonus for promoting the movie and attending award shows. Immediately prior to landing the role, he worked at the cell phone store in Minneapolis that his brother owned.