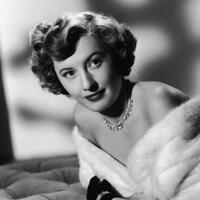 What was Barbara Stanwyck's net worth?

Barbara Stanwyck was an American actress who had a net worth of $10 million at the time of her death in 1990 (after adjusting for inflation). Over an impressive multi-decade career, Barbara appeared in more than 80 major films and was a favorite of directors Cecil B. DeMille, Frank Capra, and Fritz Lang.

Considered among the greatest of Golden Age Hollywood stars, she appeared in such films as "Baby Face," "Stella Dallas," "Union Pacific," "Ball of Fire," "The Lady Eve," "Double Indemnity," and many others. By the 1960s, Stanwyck moved to television, where she had successes with "The Barbara Stanwyck Show," "The Big Valley," and "The Thorn Birds."

In the early to mid-1940s, Barbara Stanwyck was the highest paid actress in the world. According to a report put out by the Federal government, in 1944 Barbara earned $400,0000 and was one of the highest-paid women in the country overall. Earning $400,000 in 1944 is the same as making $6.5 million per year in today's dollars, after adjusting for inflation.

Barbara Stanwyck was born as Ruby Catherine Stevens on July 16, 1907 in Brooklyn, New York as the youngest of five children of Byron and Catherine. She was of English and Scottish heritage, and her siblings were Laura, Viola, Mabel, and Malcolm. When Stanwyck was four, her mother was killed after being pushed off a moving streetcar by an inebriated passenger. Shortly after the funeral, her father left to work on the Panama Canal and never returned. Stanwyck was subsequently raised by her sister Laura, and then moved through various foster homes.

Stanwyck got into show business in 1916 when she began touring with her sister Laura, who landed a job as a showgirl. When she was 14, Stanwyck dropped out of school and took a job wrapping packages at a department store in Brooklyn. Following this, she worked a filing job at a telephone office, and then worked cutting dress patterns for Vogue magazine. After being fired from Vogue when customers criticized her work, Stanwyck became a typist for the Jerome H. Remick Music Company.

In 1922, Stanwyck became a dancer in the Ziegfeld Follies; she performed with the group again for the 1923 season. She went on to perform as a chorus girl at nightclubs over the subsequent years. Stanwyck had her greatest success yet when she costarred in the Broadway play "The Noose" in 1926. This led to many further Broadway roles, including her first leading role in "Burlesque" in 1927. 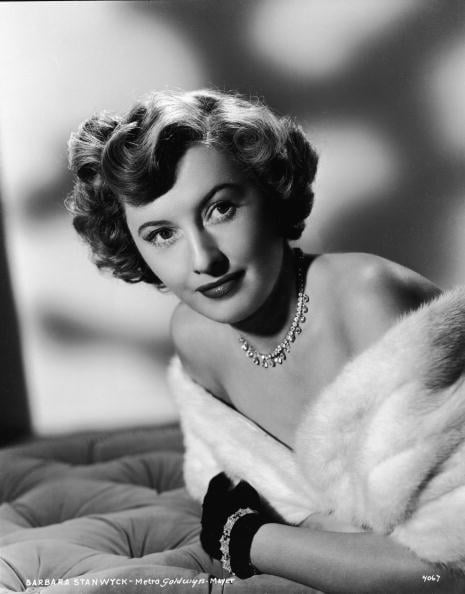 Stanwyck had her first starring role on film in 1929 in the drama "The Locked Door"; she followed it up the same year with "Mexicali Rose." Next came "Ladies of Leisure," her first of many films directed by Frank Capra. Stanwyck was subsequently in "Illicit," "Ten Cents a Dance," "Night Nurse," "The Miracle Woman," "Forbidden," "Shopworn," "So Big!," and "The Purchase Price." In 1933, she starred in "Ladies They Talk About," "Ever in My Heart," "The Bitter Tea of General Yen," and "Baby Face." The lattermost film, featuring Stanwyck as an ambitious, promiscuous woman sleeping her way to the top of the corporate ladder, is among the actress's most famous pre-Code films. She followed it with such titles as "Gambling Lady," "A Lost Lady," "The Secret Bride," "The Woman in Red," "Annie Oakley," "The Bride Walks Out," "The Plough and the Stars," and "This is My Affair."

In 1937, Stanwyck earned her first Academy Award nomination for Best Actress for "Stella Dallas," in which she plays the titular self-sacrificing mother. The same year, she was in "Breakfast for Two" and "Always Goodbye." In 1938, Stanwyck starred opposite Henry Fonda in the screwball comedy "The Mad Miss Manton." She closed out the decade with the Western "Union Pacific," directed by Cecil B. DeMille, and the romantic sports film "Golden Boy," directed by Rouben Mamoulian.

Stanwyck began the 1940s with some of her most acclaimed films. In the first, the romance "Remember the Night," she starred opposite Fred MacMurray. Next, in 1941, she starred in the screwball comedies "The Lady Eve" and "Ball of Fire," earning her second Academy Award nomination for the latter film. Also in 1941, Stanwyck starred in Frank Capra's "Meet John Doe" and Wesley Ruggles' "You Belong to Me." Her subsequent credits were "The Great Man's Lady," "The Gay Sisters," "Lady of Burlesque," and "Flesh and Fantasy." In 1944, Stanwyck had perhaps the most famous role of her career, playing femme fatale Phyllis Dietrichson in the classic film noir "Double Indemnity." Once again, she was paired with Fred MacMurray. For her performance, Stanwyck received her third Academy Award nomination. Her other notable credits in the 40s include "Christmas in Connecticut"; "My Reputation"; "The Strange Love of Martha Ivers"; "California"; "The Two Mrs. Carrolls"; "The Other Love"; "Cry Wolf"; "B.F.'s Daughter"; and "Sorry, Wrong Number," for which she earned her fourth and final Academy Award nomination.

In 1950, Stanwyck had memorable roles in the noirs "The File on Thelma Jordon" and "No Man of Her Own"; the Western "The Furies"; and the romance "To Please a Lady." She was subsequently in "The Man with a Cloak," "Clash by Night," "Jeopardy," "Titanic," "All I Desire," "Blowing Wild," "The Moonlighter," and "Witness to Murder." In 1954, Stanwyck had her most successful film of the decade with the drama "Executive Suite." Her film career began to slow after this, although she still had notable roles in such films as "The Violent Men," "There's Always Tomorrow," "The Maverick Queen," "Crime of Passion," "Forty Guns," "Walk on the Wild Side," and "Roustabout." Stanwyck's final film, "The Night Walker," came out in 1964.

Stanwyck began transitioning to the small screen as her film career waned in the 50s. She started out with an appearance on "The Jack Benny Program" in 1952, and then served as a guest hostess on "The Christophers" and "The Loretta Young Show." In the latter half of the decade, she appeared on the anthology series "Ford Theatre," "Goodyear Theatre," and "Zane Grey Theatre." Subsequently, from 1960 to 1961, Stanwyck hosted her own anthology program called "The Barbara Stanwyck Show"; she also acted on the show, earning an Emmy Award. This was followed by appearances on "Wagon Train," "The Joey Bishop Show," "Rawhide," and "The Untouchables," among others.

Stanwyck began her biggest and most famous television role in 1965, playing Victoria Barkley on the Western series "The Big Valley." Becoming one of the small screen's most popular faces, she received multiple Emmy nominations for her work, winning once in 1966. After "The Big Valley" ended in 1969, Stanwyck appeared in the 70s television films "The House That Would Not Die," "A Taste of Evil," and "The Letters." Later, in 1983, she had a late-career success with the miniseries "The Thorn Birds." For her performance as Mary Carson, Stanwyck won her third Emmy. Her final role on television was as Constance Colby Patterson, who first appeared on the soap opera "Dynasty" in 1985. Stanwyck then reprised the role on the spinoff series "The Colbys," which ran until 1986.

In 1928, Stanwyck married her first husband, Frank Fay, with whom she had starred on Broadway in "Burlesque." As Stanwyck was unable to have children, the couple adopted a son in 1932, naming him Dion. Stanwyck and Fay were frequently at odds with each other, with Fay reportedly resorting to physical abuse. Following their divorce in 1935, Stanwyck was granted custody of their son. In 1936, she began a relationship with Robert Taylor, her costar in the film "His Brother's Wife." The two married in 1939, and later divorced in 1952. Stanwyck never remarried, but did have a four-year affair with her "Titanic" costar Robert Wagner, who was 23 years her junior.

In January of 1990, Stanwyck passed away from congestive heart failure and chronic obstructive pulmonary disease. She had been a habitual smoker since the age of nine. Stanwyck was 82 years of age.