Barbara Carrera Net Worth: Barbara Carrera is a Nicaraguan film and television actress and former model who has a net worth of $15 million dollars. Born September 1, 1944 in San Carlos, Rio San Juan, Nicaragua, she has traveled the world over, mastering five languages. She was one of the few top models to successfully make the transition from model to big screen actress.

Barbara started modeling as a teenager and has graced the covers of more than 300 fashion magazines, including Vogue, Harper's Bazaar, Cosmopolitan and Elle. She has received several Golden Globe nominations and other awards for her work in film and is the only actress to ever receive a nomination for her work in a James Bond movie. Yet another facet of her talent is her artwork, which has received international acclaim. She has painted portraits of such high profile artists as Audrey Hepburn, Grace Kelly, Marilyn Monroe, Elizabeth Taylor, Greta Garbo, Charlie Chaplin, Anthony Quinn, James Dean, Gary Cooper, Cary Grant, Humphrey Bogart, Vivien Leigh (As Scarlet O'Hara) and Clark Gable (As Rhett Butler). In 2003, Barbara Carrera's Hollywood Legends series of portraits was the subject of a two month solo exhibition at the Hollywood entertainment museum in Hollywood, California. When she started in the film business, she vowed to work with some of the old time greats and did manage to work with Sean Connery (with whom she co-starred in the James Bond film, Never Say Never Again), Bette Davis (whom she starred with in the black comedy, Wicked Stepmother) and Paul Newman (in When Time Ran Out). She also worked with Sir Laurence Olivier, Burt Lancaster, Michael York and Peter O'Toole. 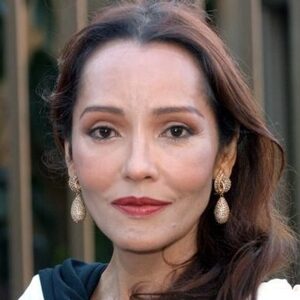