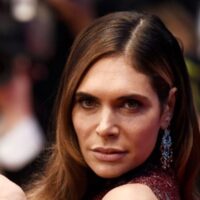 Ayda Field net worth: Ayda Field is an American actress who has a net worth of $30 million. Though it should be noted that her net worth is hard to peg since she's been married to Robbie Williams since 2010. Robbie Williams' net worth is $300 million. Together Robbie and Ayda own at least $100 million worth of real estate, the majority of which was bought after their marriage. If they ever divorced, Ayda would be entitled to half the value of their real estate and half the income and other assets earned during the marriage.

Ayda Field was born in Los Angeles, California in May 1979. From 2000 to 2001 she had a recurring role as Angela Moroni on the soap opera Days of Our Lives. Field appeared on the TV series Blue Collar from 2004 to 2006. From 2006 to 2007 she starred as Jeannie Whatley on the series Studio 60 on the Sunset Strip. Field starred as Montana Diaz Herrera on the television series Back to You from 2007 to 2008. She had recurring roles on the TV series Fresh Meat as Rosa in 2016, Power Monkeys as Bea in 2016, and Paranoid as Sheri in 2016. She is also known for presenting the TV series Loose Women beginning in 2016 and being a judge on the reality TV series The X Factor in Britain in 2018.

Real Estate Assets: Robbie and Ayda own an extensive real estate portfolio that includes mansions all over the world, most notably in England and Los Angeles. In 2015, Robbie and Ayda dropped $32 million for a massive Beverly Hills compound. This house has 25,000 square feet of living space, an 11-car garage, an orchard and 22 bathrooms. In 2016 they spent $22 million on a London mansion that has 46 bedrooms. In July 2018 they spent $21 million on a Malibu mansion. In total, Robbie and Ayda own at least $100 million worth of real estate.