Audrey Tautou net worth: Audrey Tautou is a French actress and model who has a net worth of $20 million. Named after actress Audrey Hepburn, Tautou started acting at a young age and started with television movies after winning a talent search contest in France in 1999. Her first major role in film came in Venus Beauty Institute in 1999. The appearance helped her win the Cesar Award for Most Promising Actress. Her role in Amelie in 2001 was met with critical acclaim. Luckily director Jean-Pierre Jeunet decided to give the role to Tautou after Emily Watson dropped out. She has gone on to appear in major motion pictures Dirty Pretty Things and The Da Vinci Code. In addition to her many film roles Audrey Tautou has modeled for L'Oreal, Chanel, and Montblanc. She received the honor of being invited to join the Academy of Motion Picture Arts and Sciences in 2004. In addition to her acting work, Tautou has been recognized for her style and beauty. She was ranked #29 in Stuff Magazine's "102 Sexiest Women of the World in 2002, as well as being chosen as one of the 100 Sexiest Stars in film history in 2007 by Empire Magazine. She was also ranked by Vogue UK in 2009 as the second most stylish woman and is the face of Chanel No.5. The band Brand New even wrote a song "Tautou" about her. 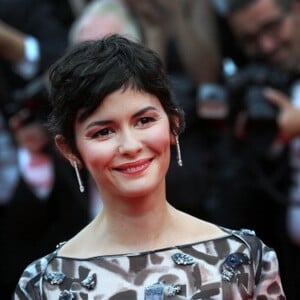