Audrey Hepburn Net Worth: Audrey Hepburn was a British-Dutch actress, fashion icon, and humanitarian, recognized as one of the greatest female screen legends of Hollywood's Golden Age. Audrey Hepburn had a net worth of $55 million at the time of her death in 1993. That's the same as $100 million in today's dollars, after adjusting for inflation. Hepburn died on January 20, 1993 at the age of 63. She was recognized as a film and fashion icon during Hollywood's Golden Age.

After appearing on stage and in minor roles on film, she ascended to superstardom in the 1953 romantic comedy "Roman Holiday," for which she won an Oscar for Best Actress; she later starred in such classics as "Funny Face," "Breakfast at Tiffany's," and "Charade." Toward the end of her life, Hepburn committed much of her time to UNICEF as a Goodwill Ambassador.

Early Life and World War II: Audrey Hepburn was born as Audrey Kathleen Ruston in 1929 in Ixelles, Brussels, Belgium. Her mother, Baroness Ella van Heemstra, was a Dutch noblewoman, while her father, Joseph, was a British national born in Austria-Hungary. Due to her parents' backgrounds and frequent travel, Hepburn initially grew up in shelter and privilege, and became fluent in multiple languages including Dutch, English, French, and Italian. However, when Hepburn was six, her father left the family and moved to London, where he became engaged in pre-war Fascist efforts. After spending time at a family estate in Arnhem, Netherlands, Hepburn was sent to live in Kent, England in 1937 to receive an education. The next year, her parents officially divorced.

Following the outbreak of World War II, Hepburn was moved back to Arnhem, where she attended the Arnhem Conservatory from 1939 to 1945. Hepburn's family was significantly impacted by the German invasion of the Netherlands; her uncle, Otto van Limburg Stirum, was executed for his part in the resistance, while her half-brother Ian was deported to a labor camp in Berlin. The family left Arnhem to live with Hepburn's grandfather in nearby Velp, where Hepburn volunteered at a hospital and danced to raise money for the Dutch resistance. During the Dutch famine of 1944, Hepburn developed respiratory problems, anemia, and malnutrition-related edema.

Career Beginnings: After the end of the war, Hepburn moved with her family to Amsterdam, where she took ballet lessons under renowned dancer Sonia Gaskell. In 1948, Hepburn made her film debut in the educational travel film "Dutch in Seven Lessons." That year, she moved to London on a ballet scholarship with Ballet Rambert, and supported herself with a part-time job as a model. Due to her diminutive stature and the effects of her wartime malnutrition, she was told that she didn't have a career as a prima ballerina; therefore, she committed herself to acting.

In the late 40s, Hepburn took to the stage as a chorus girl in the West End musical revues "High Button Shoes" and "Sauce Tartare." Later, in 1951, she took small parts in films such as "One Wild Oat," "Young Wives' Tale," and "The Lavender Hill Mob." Her first substantial supporting role came the next year, when she was cast as a ballerina in "The Secret People." Hepburn continued to thrive on stage, performing the titular role in the Broadway play "Gigi"; running for 219 performances, the play garnered Hepburn a Theatre World Award. 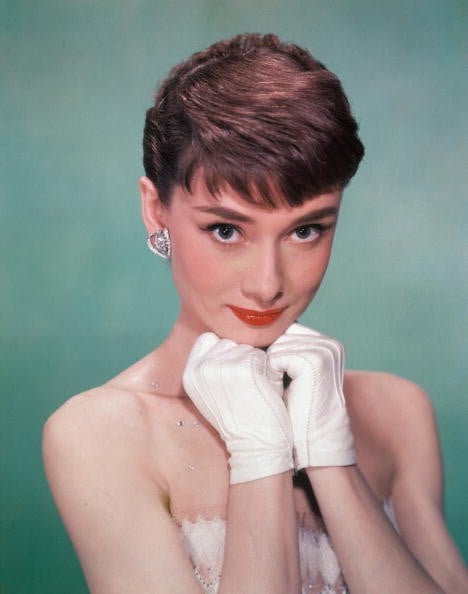 "Roman Holiday" and Superstardom: In 1953, Hepburn landed her first starring role in the romantic comedy "Roman Holiday," opposite Gregory Peck. Playing a European princess who spends an adventurous night out on the town with an American newsman, Hepburn was showered with praise. The actress won Oscar, BAFTA, and Golden Globe Awards for her performance, becoming the first female actor to accomplish that feat for a single role. Following this smash success, Hepburn was signed to a seven-picture contract with Paramount. She went on to star in the hit 1954 film "Sabrina," a Billy Wilder comedy with Humphrey Bogart and William Holden that netted her another Oscar nomination and a BAFTA win. That year, she also returned to theater in the fantasy play "Ondine," for which she won the Tony Award for Best Performance by a Leading Actress in a Play.

One of the most popular stars in Hollywood, Hepburn continued to star in hit films throughout the rest of the 50s. Her credits included the Tolstoy adaptation "War and Peace," in which she played Natasha Rostova; the Fred Astaire musical "Funny Face"; and the romantic comedy "Love in the Afternoon," costarring Gary Cooper and Maurice Chevalier. In 1959, Hepburn received her third Oscar nomination for her role as Sister Luke in "The Nun's Story."

"Breakfast at Tiffany's" and Beyond: Hepburn reached a new career zenith in 1961, when she starred as Holly Golightly in "Breakfast at Tiffany's," a loose adaptation of the eponymous Truman Capote novella. Considered one of Hollywood's most iconic characters, the role landed Hepburn yet another nomination at the Academy Awards. That year, the actress also starred in "The Children's Hour" opposite Shirley MacLaine. In 1963, she costarred with Cary Grant in the comic thriller "Charade," for which she earned her third BAFTA for Best Actress, and in 1964, reunited with William Holden for the screwball comedy "Paris When It Sizzles."

The year 1964 brought further success with the film adaptation of the musical "My Fair Lady." Starring Hepburn as Cockney flower girl Eliza Doolittle and Rex Harrison as Professor Henry Higgins, the film was a massive hit, garnering eight Academy Awards including Best Picture. Hepburn starred in a variety of films throughout the remainder of the 60s, including the heist comedy "How to Steal a Million," the British marital drama "Two for the Road," and the suspense thriller "Wait Until Dark," which netted Hepburn her fifth and final Oscar nomination.

Final Film and Media Projects: After 1967, Hepburn largely withdrew from acting to focus more on family. Her few later movie projects were 1976's "Robin and Marian," 1979's "Bloodline," and the 1981 comedy "They All Laughed." She subsequently appeared in the 1987 made-for-TV film "Love Among Thieves," and made her last movie appearance in the 1989 Steven Spielberg picture "Always," playing an angel.

Two final media projects followed: the PBS documentary series "Gardens of the World with Audrey Hepburn," and the spoken word album "Audrey Hepburn's Enchanted Tales." The former earned the actress a posthumous Emmy Award in 1993, while the latter won her a posthumous Grammy Award.

UNICEF: Hepburn was involved with UNICEF as early as the 1950s, when she narrated two radio programs for the organization. In 1989, she was appointed Goodwill Ambassador, and did frequent field missions to impoverished communities throughout South America, Africa, and Asia. In 1992, she received the Presidential Medal of Freedom for her work, and was later posthumously honored with the Jean Hersholt Humanitarian Award from the Academy of Motion Picture Arts and Sciences. In recognition of her contributions, a statue of Hepburn sits at the UNICEF headquarters in New York.

Personal Life: Hepburn was engaged to industrialist James Hanson in 1952, but decided to call off the marriage due to the demands of her career. Later, she met American actor Mel Ferrer at a cocktail party, and began dating him while they starred together in "Ondine." In 1954, they married, and divorced in 1968. Hepburn wed her second husband, Italian psychiatrist Andrea Dotti, in 1969, and had one son, Luca. The marriage, which was marked by infidelity by both Hepburn and Dotti, ended in 1982. Hepburn was in a relationship with Dutch actor Robert Wolders until her passing.

In 1992, after returning to Switzerland from Somalia, Hepburn began to suffer abdominal pain. A laparoscopy performed in the US revealed a cancer that had grown over many years. After undergoing surgery and starting chemotherapy, Hepburn returned home to Switzerland, where she spent her final days in hospice care. While sleeping, she passed away in 1993.

Legacy: Hepburn remains globally famous for her iconic Hollywood glamor, star power, and humanitarian work. In 1999, the American Film Institute ranked her third on its list of the Greatest Female Stars of All Time. One of Hepburn's sons, Sean Ferrer, founded the Audrey Hepburn Children's Fund in her honor, while UNICEF founded the Audrey Hepburn Society; the latter, which champions major UNICEF donors, has raised nearly $100 million to date. 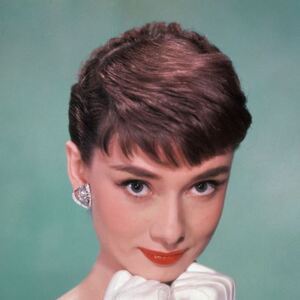