Audie Murphy net worth: Audie Murphy was an American combat soldier and actor who had a net worth of $300 thousand at the time of his death in 1971. Audie Murphy was born in Kingston, Texas in June 1925 and passed away in May 1971. He was a member of the U.S. Army and received every military combat award for valor in addition to other awards from France and Belgium.

At 19 years old he received the Medal of Honor after he single-handedly  held off an entire company of Germany soldiers for one hour and led a successful counterattack while he was wounded and ran out of ammunition. Murphy grew up with an absent father and his mother passed away while he was a teenager. He worked picking cotton after dropping out of school. Murphy's older sister helped him falsify documentation to enlist in the military after the attack on Pearl Harbor. He was turned down by both the Navy and the Marine Corps. As an actor he starred in several films including the autobiographical To Hell and Back. Murphy starred as Tom "Whispering" Smith on the television series Whispering Smith in 1961. He was awarded a star on the Hollywood Walk of Fame at 1601 Vine Street in 1960. Murphy struggled with PTSD and had financial problems later in life. He reportedly spent vast sums of money gambling on horses and investing in his own horses. After losing $268,000 in a 1968 oil deal that went bad, he found himself owing unpaid taxes to the IRS. Despite his financial problems, Audie refused to appear in commercials for alcohol or cigarettes because he was worried about the affect these ads would have on children. Audie Murphy passed away on May 28, 1971 at 45 years old in a plane crash. 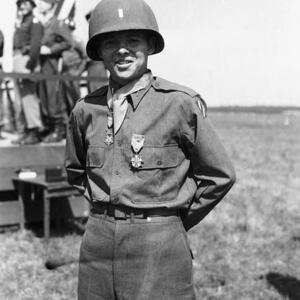