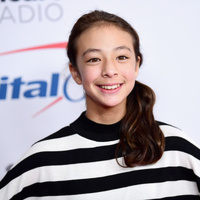 Aubrey Anderson-Emmons Net Worth and salary per episode: Aubrey Anderson-Emmons is an American child actress who has a net worth of $6 million. Aubrey Anderson-Emmons was born in Santa Monica, California in June 2007. She is best known for her role as Lily Tucker-Pritchett on the television series Modern Family. Aubrey is the daughter of Amy Anderson and Kent Emmons. Aubrey made her TV debut in the ABC sitcom Modern Family in 2011 starring as Lily Tucker-Pritchett. In 2013 she appeared in the short Child Star Psychologist 2 with Kiernan Shipka, and in 2014 she starred as Emma Stelzer in the short Distance. Aubrey appeared in the Disney Parks Christmas Day Parade in 2012. She was the youngest actress to appear on the red carpet in both the 2012 and 2013 Primetime Emmy Awards. Anderson-Emmons has won Screen Actors Guild Awards for Outstanding Performance by an Ensemble in a Comedy Series for Modern Family in 2012, 2013, and 2014.