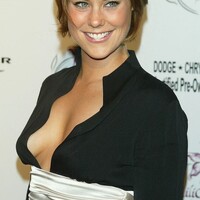 Ashley Williams Net Worth: Ashley Williams is an American actress who has a net worth of $3 million dollars. Ashley Churchill Williams was born in Westchester County, New York in November 1978. Ashley's brother-in-law is country music artist Brad Paisley. She graduated from Boston University in 2001. Her first role came in the film Indian Summer in 1993. From 1995 to 2001 Williams played Danielle Andropoulos on the soap opera As the World Turns. She made appearances in the TV shows Dawson's Creek and American Dreams and starred as Dylan Messinger on Good Morning, Miami from 2002 to 2004. From 2005 to 2006 she starred in the series E-Ring and in 2006 in the series Huff. She appeared in episodes of Psych and Law & Order: Special Victims Unit and then starred in the 2007 series Side Order of Life. In 2008 Williams played Lizzie McKenzie in the series Novel Adventures, and from 2009 to 2010 she played Amanda Dewey on Saving Grace. One of her best known roles is for playing Victoria on How I Met Your Mother since 2006. She is also known for starring in the TV movies Montana Sky, Snow, and Snow 2: Brain Freeze. Ashley married producer Neal Dodson in 2011.