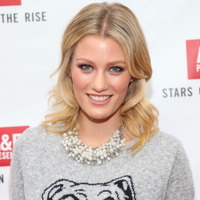 Ashley Hinshaw Net Worth: Ashley Hinshaw is an American actress and model who has a net worth of $500 thousand. Ashley Hinshaw was born in La Porte, Indiana in December 1988. She appeared in an ad campaign for Abercrombie & Fitch and her modeling experience led to her judging a beauty pageant on the MTV reality TV series Made. Her first acting role came in the television series Fringe in 2009. In 2014 she starred as Brigette in the TV series True Blood. Hinshaw has also starred in the movies Chronicle, Cherry, Rites of Passage, LOL, +1, Snake and Mongoose, and Goodbye to All That. She has appeared in episodes of the TV series The Glades, Enlightened, and The League. Her upcoming projects include the films The Pyramid, Deserted Cities, The Grounds, Hell of a View, Ciudades Desiertas, and Pep.