Ashley Hartman net worth and salary: Ashley Hartman is an American actress and fashion model who has a net worth of $500 thousand dollars. Ashley Hartman was born in Orange County, California on August 31, 1985. Her older sister, Maria Carmel, is a fashion photographer who won the VH1 reality show "The Shot" in 2007.

Growing up, she was the church cantor at her elementary school. From her freshman through junior year, Hartman attended Mater Dei High School in Santa Ana, California. In 2003, she auditioned for American Idol where she placed in the top 32. The judges recommended that she pursue a career in acting and modeling. Hartman appeared on the first six episodes of The O.C. as Holly Fischer, and reappeared in the fourth season for four episodes. She was also in the horror movie Abominable. She is currently the host of MTV's "Kiss & Tell: The Do's and Don'ts of Dating and is the face of CBS Mobile and TV.com. 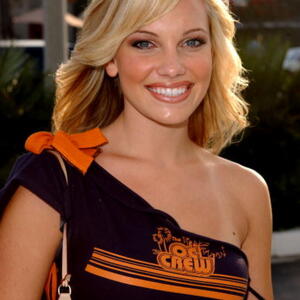