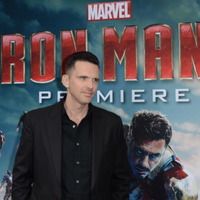 Ashley Hamilton Net Worth: Ashley Hamilton is an American songwriter, singer and actor who has a net worth of $5 million. Ashley Hamilton was born September 30, 1974 in Los Angeles, California. In 1993, Hamilton appeared with Shannen Doherty on Saturday Night Live and also appeared in the movie Beethoven's 2nd. In 1997, he briefly starred in the television series Sunset Beach as Cole Deschanel, but was let go only a month after the premiere. He is a music artist and songwriter as well. Since 2007, Ashley has been performing stand-up comedy at the Hollywood Improv, The Comedy Store and Room 5 in Los Angeles. In June 2003, Hamilton released a single entitled Wimmin' which reached No. 27 on the U.K. Singles Chart. The song was co-written by the British singer Robbie Williams who also provided some of the vocals on the track. Hamilton co-wrote Williams' 2003 single Come Undone. Hamilton also claims to have co-written Williams' single She's Madonna in 2006, and says Williams omitted his name from publishing. It was announced on August 17, 2009, that Hamilton would be competing in season 9 of Dancing with the Stars and he was eliminated first from DWTS on September 23, 2009. Hamilton then joined the entertainment news program EXTRA as a field correspondent. He went on to appear as the character Jack Taggert in the 2013 film Iron Man 3. Ashley Hamilton is the son of actors George Hamilton and Alana Stewart and a stepson of musician Rod Stewart. At 19, Hamilton garnered media attention when he and actress Shannen Doherty (of 90210 fame, the original) got married after knowing each another for only two weeks. The marriage lasted just five months before Doherty filed for divorce. Hamilton was also formerly married to model/actress Angie Everhart.