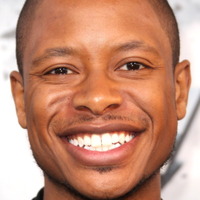 Arjay Smith net worth: Arjay Smith is an American actor who has a net worth of $800 thousand dollars. Arjay Smith was born in Los Angeles, California on November 27, 1983. His acting career began on the sitcom Nick Freno: Licensed Teacher. Smith had a role in the movies The Day After Tomorrow, Vacancy 2: The First Cut, and To Save a Life. He had a recurring role in Malcolm in the Middle. Some of the television shows he has appeared in are NYPD Blue, Criminal Minds, Bones, Without a Trace, That's So Raven, The West Wing, ER and Medium. Smith is best known for The Journey of Allen Strange, a Nickelodeon series. He portrayed a terrorist on the Fox thriller 24 and currently takes on the role of Max Lewicki on the TNT series, Perception.