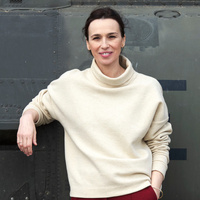 Ariadna Gil Net Worth: Ariadna Gil is a Spanish actress who has a net worth of $8 million dollars. She was born Ariadna Gil Giner in Barcelona, Spain in January 1969. She studied the violin and sang and danced as a child. She sometimes sang with her brothers in their band Matamala. When she was 17 she appeared on the cover of a Catalonian magazine. Gil acted in local theater and gave Catalan language classes on local TV. Her first appearance came in the 1986 movie Lola. Gil's breakout role was in the 1992 film Amo Tu Cama Rica with Javier Bardem. She also starred in the romantic comedy Belle Epoque with Penelope Cruz. Gil received critical acclaim for her roles in Malena es Un Nombre de Tango and Black Tears. She has won 16 awards including a Butaca Award, Catalonian Actors and Directors Association, Cinema Writers Circle Award, Goya Award, Ondas Award, Premios ACE, Saint Jordi Award, and Turia Award. Gil has also appeared in the films Libertarias directed by Vicente Aranda, Soldados de Salamina directed by her ex-husband David Trueba, and El laberinto del fauno directed by Guillermo del Toro. In 1997, she had a daughter Violeta Rodriguez with Trueba.