Anupam Kher Net Worth: Anupam Kher is an Indian actor who has a net worth of $70 million. Anupam Kher was born in Shimla, Himachal Pradesh, India in March 1955. He has appeared in over 450 films and 100 plays. Most of his films have been Bollywood Hindi movies. Anupam has been Chairman of the Censor Board and National School of Drama in India.

His first role came in the 1982 film Apmaan. Kher played Dr. Cliff Patel in the 2012 Oscar winning film Silver Livings Playbook. He has also starred in American films Bend it Like Beckham in 2002 and A Wednesday in 2008. Kher launched his own entertainment company in 1994. He is one of the founding members of the organization People for Animals. The Government of India honored Anupam with the Padma Shri in 2004 for his contribution to Indian cinema. He has received the Filmfare Award for Best Performance in a Comic Role more than any other actor at five times. He has also produced three films and directed one. Anupam married actress Kirron Kher in 1985. In 2002 he was awarded the Actor of the Decade Award from the Millennium Honours. He also won the Real Life Hero Award at the Zee Gold Bollywood Awards in 2001 and an Outstanding Achievement in Cinema award at The Asian Awards in 2013. 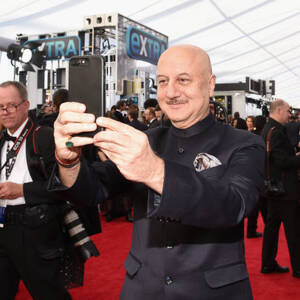