How much is Anthony Quinn Worth?

Anthony Quinn net worth: Anthony Quinn was a Mexican American actor, painter, writer and director who has a net worth of $20 million dollars. Born in Chihuahua, Chihuahua, Mexico on April 21, 1915, Quinn was best known for his roles in La Strada, The Guns of Navarone, Lawrence of Arabia, Zorba the Greek, Guns for San Sebastian, The Message, Lion of the Desert, Viva Zapata!, and Lust for Life. He became active in the entertainment industry in 1936 began boxing professionally at a young age to earn money. He went on to study art at Frank Lloyd Wright's studio, Taliesin. He made his acting debut in 1936 in the films Parole and Milky Way. He later performed on Broadway in A Streetcar Named Desire and became a United States Citizen in 1947. Quinn was married to actress Katherine DeMille and had five children by the names of Christopher, Christina, Catalina, Duncan, and Valentina. The were married from 1937 until 1965 when it became public that he was having an affair with Jolanda Addolori. They eventually married in 1966 and had three children by the names of Francesco Quinn, Danny, and Lorenzo Quinn. Quinn later had another affair, resulting in children, with his secretary, Katherine Benvin, by the names of Antonia and Ryan Nicholas. Addolori and Quinn divorced in 1997. Also in the 1990s, many TV fans got what in some cases proved to be their first and lasting impression of Quinn, when Cosmo Kramer on the hit sitcom Seinfeld claimed to have stolen his undershirt while "he was doing sit-ups in the park" (Quinn did not appear in the episode in question). Quinn and Benvin stayed together until his death in 2001, however he also had children with Friedal Dunbar by the names of Sean and Anthony Alexander. He passed away in Boston, Massachusetts at age 86 from pneumonia due to respiratory cancer. 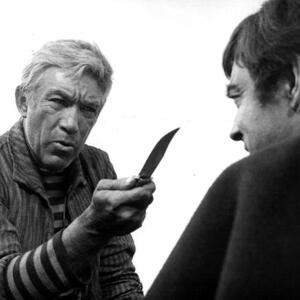