Annie Potts net worth and salary: Annie Potts is an American actress who has a net worth of $8 million dollars. Born in Nashville, Tennessee, Annie Potts graduated from Stephens College with a degree in Fine Arts with a focus on Theater Arts. She first garnered critical attention for her performance in the film, "Corvette Summer" in the late 70s. She was nominated for a Golden Globe for her performance. Her work in that film would lead to starring roles in the "Ghostbusters" film franchise, and the role that would make her a household name, as Mary Jo Shiveley on the hit 80's sitcom, "Designing Women". She would play the role for seven seasons, 166 episodes in total. In addition to her work on "Designing Women", she starred or guest starred in a number of television series, including "Any Day Now", "Joan of Arcadia", "Ugly Betty", "Boston Legal", and most recently, "GCB". She was also the voice of Bo Peep in the "Toy Story" franchise. Annie Potts made a cameo appearance in the 2016 "Ghostbusters" reboot. She also revised her voice role as Bo Peep for the 2019 "Toy Story 4" sequel. Starting in 2017, Annie began appearing as a main cast member of the CBS sitcom "Young Sheldon".

Annie Potts Net Worth from Real Estate: In September 2014, Annie and her husband, NCIS: New Orleans producer James Hayman, listed their 7000 square foot Tarzana, California home for $6.5 million. In April 2019 they listed a home in nearby Sherman Oaks for $1.84 million.

Annie Potts Height: Annie is famously tiny. Some reports list her height as 5 foot 3. Others peg her at 5 foot 2 or smaller. 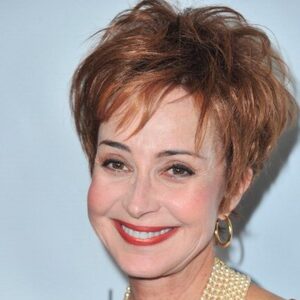