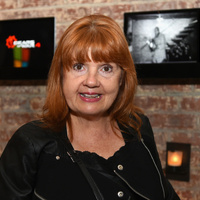 Annie Golden net worth: Annie Golden is an American actress and singer who has a net worth of $1.5 million. She first became famous as the lead singer of the punk rock band The Shrits. She eventually transitioned into a respectable acting career that has included appearances in a number of notable movies and TV shows.

Annie Golden was born in Brooklyn, New York in October 1951. She started out as the lead singer of the band The Shirts and later as part of the duo Golden Carillo with Frank Carillo. The duo released three albums. Golden's solo song "Hang Up the Phone" was on the soundtrack for the movie Sixteen Candles. As an actress Golden first starred in the movie Hair in 1979. Since 2013 she has starred as Norma Romano on the series Orange Is the New Black. Golden has starred in the movies Desperately Seeking Susan, Key Exchange, Streetwalkin', Forever, Lulu, Love at Stake, Baby Boom, Longtime Companion, Strictly Business, This Is My Life, Prelude to a Kiss, Twelve Monkeys, One Way Out, Arresting Gena, My Divorce, Barriers, The American Astronaut, Mourning Glory, Delayed, It Runs in the Family, Messengers, Temptation, Brooklyn Rules, Sexina, Adventures of Power, I Love You Phillip Morris, and The Trouble with Cali. Golden has also appeared in episodes of the TV series Miami Vice, Dear John USA, True Blue, Cheers, Law and Order, Third Watch, Law & Order: Special Victims Unit, and Wiener and Weiner. In 2015 Golden won a Screen Actors Guild Award for Orange Is the New Black.