Anneliese van der Pol net worth: Anneliese van der Pol is a Dutch American actress and singer who has a net worth of $1 million. Anneliese van der Pol was born in Naaldwijk, Netherlands in September 1984. She started her career in musical theater and has performed in Broadway and off-Broadway shows. Van der Pol performed in productions of The Sleeping Beauty Ballet, The Sound of Music, The Will Rogers Follies, Fiddler on the Roof, Grease, Evita, Oklahoma!, The Nutcracker, Beauty and the Beast, and more. In 1999 she was the youngest actress in history to play the role of Evita in a professional production at 15 years old. Her best known screen role came starring as Chelsea Daniels on the television series That's So Raven from 2003 to 2007. From 2010 to 2011 she starred as Anneliese on the TV series Shalom Sesame. Van der Pol has also starred in the movies Divorce: The Musical, Bratz, Vampires Suck, and Cats Dancing on Jupiter. In 2005 she was nominated for a Young Artist Award for Outstanding Youth Performers in a TV Series for That's So Raven. 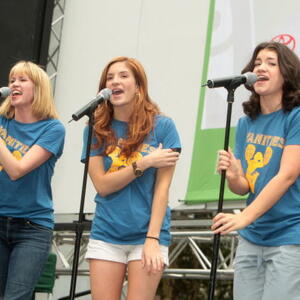