Anne Sinclair Net Worth: Anne Sinclair is a French American television and radio personality who has a net worth of $200 million. She is the granddaughter of one of France's and New York's biggest art dealers Paul Rosenberg and heiress to his fortune.

Anne Sinclair was born in New York City, New York in July 1948.She studied at the Paris Institute of Political Studies and the University of Paris. Her first radio job came at Europe 1. She hosted the Sunday evening news and political television show 7/7 from 1984 to 1997. During that time Sinclair became one of France's best known journalists. She interviewed the likes of Bill Clinton, Nicolas Sarkozy, Mikhail Gorbachev, Prince Charles, Madonna, Paul McCartney, and Woody Allen. She won three Sept d'Or awards which are equivalent to Emmys. She left 7/7 in 1997 to avoid a conflict of interested when her husband Dominique Strauss-Kahn became the new French finance minister. She ran an internet subsidiary company for TF1 for four years. Anne launched the radio program Libre Cours in 2003 on France Inter. She has written two best-selling political books. Her blog Two or three things from America was launched in 2008. Sinclair covered the 2008 U.S. Presidential campaign for Le Journal du Dimanche and the TV channel Canal+. Anne divorced Strauss-Kahn in 2013.

Anne Sinclair Fortune: Anne Sinclair is the heir to an extraordinarily large and significant art fortune. Anne's grandfather Paul Rosenberg was a French art agent who happened to be best friends with Pablo Picasso. Rosenberg built one of the most-successful art agency businesses, representing Picasso, Matisse and many others. Rosenberg famously struck arrangements with the artists he represented that would give him the first right to acquire all of their works directly from each artist. At the time of his death in 1959, Paul personally owned around 100 pieces of art that would eventually become almost priceless. He owned around 40 works by Picasso alone, as well as works by Renoir, Degas and Seurat.

Over the years the family has sold some pieces. They sold a Money for $20 million, a Matisse for $33 million and a Leger for $22.4 million.

Real Estate: When they were together, Anne and Dominique maintained a $4 million home in Washington D.C.'s Georgetown neighborhood and two apartments in Paris worth a combined $10 million. All of the real estate was in Anne's name. 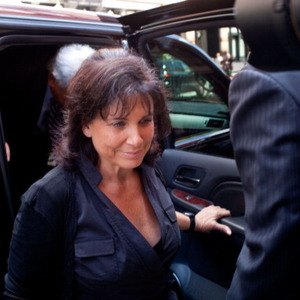