Annabeth Gish Net Worth and salary: Annabeth Gish is an American actress who has a net worth of $4 million. Annabeth Gish was born in Albuquerque, New Mexico in March 1971. Gish graduated from Duke University in 1993. Her acting debuts came in the 1986 movie Desert Bloom and the TV series Walt Disney's Wonderful World of Color. She starred as Ryan Campbell in the 1987 film Hiding Out and as Kat Arujo in 1988's Mystic Pizza and as Pudge in the 1989 film Shag. In 1994 Gish starred in the TV mini-series Scarlett. She starred as Lenore Laderman in the TV series Courthouse in 1995. From 2001 to 2002 Annabeth starred as Monica Reyes in the television series The X-Files. From 2003 to 2006 she played the recurring role of Elizabeth Bartlet Westin in the series The West Wing. Gish starred as Eileen Caffee in the TV series Brotherhood from 2006 to 2008. She played Anne Sullivan in the series Pretty Little Liars from 2011 to 2013. Since 2013 she has starred as Charlotte Millwright in the TV series The Bridge. She also stars as Sheriff Jarry in the TV series Sons of Anarchy. Gish has also starred in the movies When He's Not a Stranger, Couple de Ville, Wyatt Earp, The Last Supper, Nixon, Beautiful Girls, Don't Look Back, Steel, SLC Punk!, To Live Again, Double Jeopardy, Sealed with a Kiss, Pursuit of Happiness, Race to Space, Buying the Cow, A Death in the Family, Knots, The Celestine Prophecy, The Chaperone, and Home Run Showdown. She was nominated for a Screen Actors Guild Award in 1996 and for Young Artist Awards in 1989 and 1990. Between 2016 and 2017, Annabeth Gish appeared in 17 episodes of Halt and Catch Fire. 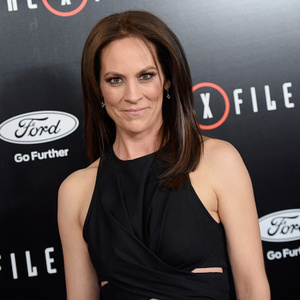