How much is Anna Mouglalis Worth?

Anna Mouglalis Net Worth: Anna Mouglalis is a French actress who has a net worth of $8 million. Born in 1978 in Nantes, Loire-Atlantique, France, Anna Mouglalis attended the Conservatoire National Superieur d'Art Dramatique de Paris. She made her on-screen debut in 1998's "Terminale" before appearing in "Merci pour le chocolat" alongside Isabelle Huppert in 2000. Mouglalis scored a part in 2002's "Novo", 2003's "La Maladie de la mort", and "Alithini Zoi". Because she's fluent in several languages, including English, Italian, Spanish, and French, Mouglalis appeared in several Italian movies in the mid-2000s, including "Mare buio" and "Romanzo criminale". She starred alongside Lorant Deutsch in the TV film "Les Amants du Flore" and played Coco Chanel in 2009's "Coco Chanel & Igor Stravinsky", which was screened at the Cannes Film Festival. Her other TV and film credits include "Des mots d'amour", "X Femmes", "En attendant le deluge", "Gainsbourg (Vie heroique)", "En jouant dans la compagnie des homes", "La Vie nouvelle", "La captive", "De l'histoire ancienne", "Kiss of the Damned", and "La Jalousie". She has modeled for several international brands, including appearing in several ads for a variety of Chanel products. She and partner, director Samuel Benchetrit, welcomed their first child, a daughter named Saul, in 2007. 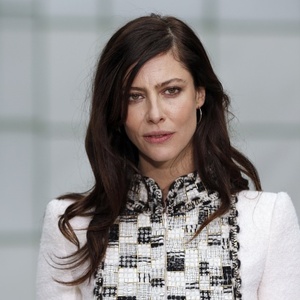