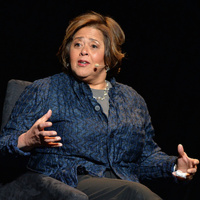 Anna Deavere Smith net worth: Anna Deavere Smith is an American actress, playwright, and professor who has a net worth of $4 million. Anna Deavere Smith was born in Baltimore, Maryland in September 1950. She serves as the artist-in-residence for the Center of American Progress. From 2000 to 2006 she starred as Nancy McNally on the television series The West Wing. From 2009 to 2015 Smith starred as Gloria Akalitus on the TV series Nurse Jackie. She has also had recurring roles on the TV series The Practice, Presidio Med, and Black-ish. Anna Deavere Smith has appeared in several films including Soup for One, Philadelphia, Dave, The American President, The Manchurian Candidate, and more. She has been nominated for a Screen Actors Guild Award and several Image Awards. Smith has also starred in several stage productions since 1974 including a number of one-woman shows that she has written including Fires in the Mirror and Twilight: Los Angeles, 1992.