Anna Camp Net Worth and Salary: Anna Camp is an American actress who has a net worth of $4 million. Anna is probably best-known for appearing in the HBO series "True Blood" and the "Pitch Perfect" film franchise.

Born in 1982 in Aiken, South Carolina, Anna Camp earned her bachelor's degree in fine arts from the University of North Carolina School of the Arts before moving to New York City to pursue an acting career. Camp made her on-screen debut in an episode of "Roswell" in 2001, but didn't appear in a TV or film role again for the next six years. In the mean time, she appeared on stage in "columbinus" and Broadway's "Equus" alongside "Harry Potter" star Daniel Radcliffe. Camp scored her first major TV role on "True Blood" as Sarah Newlin in 2009; her character appeared in the second season and became a cast regular for seasons six and seven. She was nominated for a SAG Award for Outstanding Performance by an Ensemble in a Drama Series for her performance. Camp went on to appear on "The Office", "Glee", "Cover Affairs", "Mad Men", "The Good Wife", "Vegas", "The Mindy Project", and "How I Met Your Mother". She's best known for her part in the hit film "Pitch Perfect" as a cappella singer Aubrey Posen. Camp won an MTV Movie Award for Best Musical Moment and was nominated for an MTV Movie Award for Best WTF Moment and a Teen Choice Award for Choice Movie: Hissy Fit. She has also appeared in "Goodbye to All That" and "Autumn Wanderer". 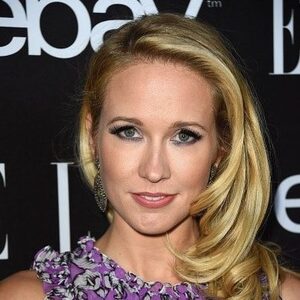