Ann Dowd net worth and salary: Ann Dowd is an American actress who has a net worth of $4 million. Ann Dowd was born in Holyoke, Massachusetts in January 1956. She has acted on stage as well in television and movies. She has starred on Broadway three times. From 1997 to 1998 Dowd starred as Sister Mo in the television series Nothing Sacred.

From 2013 to 2014 she starred as Estabrooks Masters in the TV series Masters of Sex. Dowd starred as Patti Levin in the series The Leftovers and appeared in 14 episodes of the series between 2014 and 2017. She has starred in the movies Philadelphia, It Could Happen to You, The Notorious Bettie Page, Flags of Our Fathers, Marley & Me, Gimme Shelter, Side Effects, and Captain Fantastic. Dowd has also appeared in episodes of the TV series Law & Order, Chicago Hope, Judging Amy, Providence, The X-Files, NYPD Blue, Freaks and Geeks, Law & Order: Special Victims Unit, Third Watch, Touched by an Angel, House, and True Detectives. Starting in 2017, Ann Dowd began starring in the Hulu series The Handmaid's Tale. She has received overwhelming critical acclaim for her work on the show. In 2017 she won an Emmy for Outstanding Supporting Actress in a Drama Series for her role on The Handmaid's Tale. Ann has been married to Lawrence Arancio since 1984 and together they have three children. 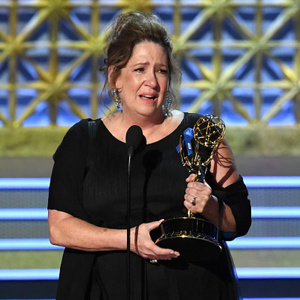