Anita Ekberg net worth: Anita Ekberg is a Swedish actress and model who has a net worth of $10 million dollars. Born on September 29, 1931 as Kerstin Anita Marianne Ekberg, she is widely regarded as a sex symbol. In 1950, Ekberg competed the Miss Universe pageant, but did not win. As one of the six finalists, though, she was awarded a contract with Universal Studios.

She appeared in the 1953 film Abbott and Costello Go to Mars. As a model, Ekberg was a major 1950s pin-up girl before she managed to break into the film industry. Ekberg has worked with stars such as John Wayne, Dean Martin, Jerry Lewis, Mel Ferrer, Audrey Hepburn, Bob Hope and Frank Sinatra. Ekberg has been compared to Marilyn Monroe. She appeared in War and Peace (1956), Back From Eternity (1956), Paris Holiday (1958), Boccaccio '70 (1962), 4 for Texas (1963), and Intervista (1987). Ekberg was married to actor Anthony Steel-best known for his role 1950 British war film The Wooden Horse-from 1956 to 1959. She was married to Rik Van Nutter-best known for his portrayal of James Bond character Felix Leiter in the 1965 film Thunderball-from 1963 to 1975. Ekberg retired from acting in 2002 after a career lasting more than 50 years. She most recently was living in Genzano di Roma. 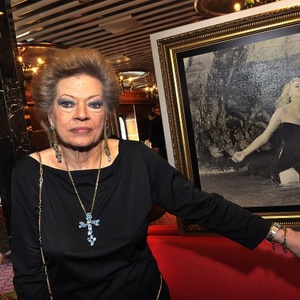