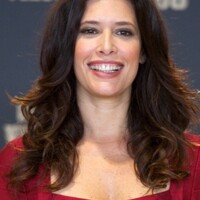 Angie Cepeda Net Worth: Angie Cepeda is a Colombian actress who has a net worth of $5 million. Angie Cepeda was born in Cartagena de Indias, Colombia in August 1974. Her older sister is actress Lorna Paz. She moved to Bogata to pursue acting and appeared in some beer ads. Her first TV appearances came in 1993 in the mini-series Cronicas de una generacion tragica and in the series La maldicion del paraiso. Cepeda made her film debut in the movie Ilona llega con la lluvia in 1996. In 1997 she starred as Juana Valentina in the soap opera Las Juanas. From there she starred in the series Luz Maria in 1998. In 2000 she starred in the series Pobre diabla. After that she went back to film and starred in Captain Pantoja and the Special Services, Leyenda de fuego, Sammy and Me, Destiny Has No Favorites, Suddenly Paradise, Love for Rent, and The Hidden. In 2006 she starred as Mara in the TV mini-series Vientos de agua. Angie starred in the TV series Fuera de lugar in 2008 and Los protegidos from 2010 to 2012. She has also starred in the films The Dead one, Love in the Time of Cholera, For the Good of Others, Una hora mas en Canarias, Heleno, and A Night in Old Mexico. In 2004 Cepeda won a Best Actress Award at the Vina del Mar Film Festival.