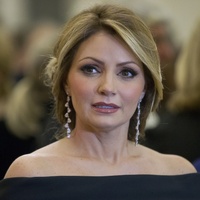 Angelica Rivera Net Worth: Angelica Rivera is a Mexican actress and singer who has a net worth of $20 million. Angelica Rivera Hurtado was born in Mexico City, Mexico in August 1969. At 17 she won The Face of the Herald contest and was a model for the video Ahora Te Puedes Marchar. She filmed TV and radio commercials and hosted a TNT video program. She had a recurring role in the TV series Dulce desafio from 1988 to 1989. She also starred in shows like Simplemente Maria, La Picara Sonadora, and Mi Pequena Soledad. She starred as Silvana in the series Alcanzar una estrella II in 1991. Rivera played Marcia in the soap opera Mariana de la Noche in 2003. In 2007 she starred in the novella Destilando amor playing Gaviota. She has starred in La Duena, Angela, and Sin Pecado Conecbido. Rivera won TVyNovelas Awards for Best Female Revelation in 1996, Best Female Antagonist in 2004 and Best Lead Actress in 2008. She serves as the First Lady of Mexico since she is married to Mexican President Enrique Pena Nieto. She retired from her career after marrying Nieto. Angelica has three children with former husband Jose Alberto Castro. Pena Nieto also had three children from a former marriage.

Wealth and Mansion: In 2014, Angelica made headlines when it was revealed that a Mexican business tycoon named Juan Armando Hinojosa Cantu, who earned his fortune off government contracts, had given the actress a $7 million mansion. The tycoon reportedly received $3.5 billion worth of government contracts from Pena Nieto's administration, many of which were given without competitor bids. Angelica would later claim that the $7 million house was not a gift but a loan that would be paid back with her own acting earnings. A Mexican financial outlet investigated how much the typical soap actress earns at Angelica's former employer and concluded the highest-paid stars earned 5 – 8 million pesos per year. That's the same as around $265,000 – $500,000 per year. Actors are also typically signed-on for 5 year exclusive contracts. The implication here being that it would be extremely hard to understand how Angelica could have enough personal wealth to afford a $7 million mansion.