Angel Coulby Net Worth: Angel Coulby is an English actress who has a net worth of $5 million. She was born in August of 1980 in north London. After moving to Edinburgh to study acting at Queen Margaret University, she pursued a career in television. Coulby appeared in a 1997 episode of Scariest Places on Earth, not!

as a student who had an encounter with a ghost. Her first prominent role in British television came on the BBC comedy 'Orrible. She is best known for her 2008 role playing "Gwen" Pendragon, a young woman who would later become Queen Guinevere, in the BBC television series Merlin. Coulby has stated that she enjoyed the opportunity to play both a lowly maidservant character in Gwen and one of the most powerful people in all of Camelot in Queen Guinevere. More recently, the actress appeared in the five-part BBC Two Stephen Poliakoff drama serial Dancing on the Edge, in which she played a jazz singer named Jesse. Also in 2013, Coulby starred in a British remake of The Tunnel, a Scandinavian crime drama. Outside of acting, Coulby enjoys sewing and designing clothing. She often attends music festivals and plays the guitar as well. 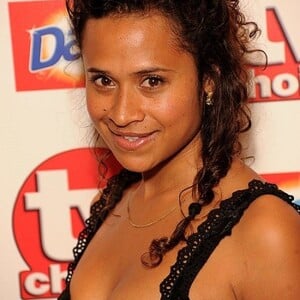