Andy Whitfield Net Worth: Andy Whitfield was an Australian actor who had a net worth of $5 million dollars. Born in Amlwch, Wales, United Kingdom, in 1971, Andy Whitfield attended Sheffield Hallam University and worked as an engineer in Australia before he began his acting career. Whitfield also enrolled in the Screenwise Film & TV School for Actors in Sydney.

He landed parts in "All Saints", "The Strip", "Packed to the Rafters" and "McLeod's Daughters" before scoring a role in "Gabriel". Whitfield went on to earn his best-known part in the series "Spartacus: Blood and Sand" where he played the lead role of Spartacus. He developed a successful modeling career, which began while he was still working as an engineer, with appearances in dozens of ads around Europe and Asia. Whitfield met his wife, Vashti Whitfield, in London, and they married in 2001, and had two children together. Nine years later, he was diagnosed with non-Hodgkin lymphoma, which delayed his filming on the "Spartacus" series. He was proclaimed to be in remission later that year, but a few months later, he relapsed and had to give up his part in the series. Liam McIntyre went on to play Spartacus. Whitfield died of the disease on September 11, 2011. He was 39 years old. 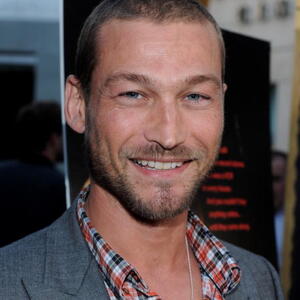