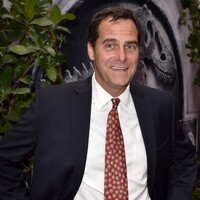 Andy Buckley net worth and salary: Andy Buckley is an American actor, screenwriter, and stockbroker who has a net worth of $5 million. Andy Buckley was born in Salem, Massachusetts in February 1965. He is best known for playing the role of David Wallace on the television series The Office. Buckley graduated from Stanford University and studied at the Groundlings Theatre. He appeared in two music videos by Reba McEntire in 1997. His best known role came starring on the TV series The Office from 2006 to 2013 as David Wallace, the embattled CFO and later CEO of paper company Dunder Mifflin. He appeared in a total of 46 episodes of The Office. Buckley starred as Ted Mercer on the television series The Lying Game from 2011 to 2013. He has also had recurring roles on the TV series Pacific Blue and Veep. He has starred in the movies A Woman Named Jackie, Forever Love, The Big Day, Grand Champion, ExTerminators, The Other Guys, Life as We Know It, Bridesmaids, Alvin and the Chipmunks: Chipwrecked, The Heat, Ask Me Anything, and Horrible Bosses 2. Buckley has also appeared in episodes of the TV series China Beach, Silk Stalkings, Caroline in the City, Melrose Place, The West Wing, The District, NYPD Blue, CSI: Crime Scene Investigation, CSI: Miami, Arrested Development, and The League.

Andy Buckley is not just acting when he plays a corporate executive. When he was not appearing on set, Andy works for a wealth management advisory firm in Los Angeles. He advises extremely wealthy doctors, lawyers, actors and producers on how to grow their net worth. He attended Stanford University where he earned a bachelor's degree in political science. After college he moved to New York City to study acting. To make ends meet he worked odd jobs that included cleaning pools. He temporarily gave up acting in 2001 and attended a training session for an Investment Bank where he wound up working for more than a decade, ultimately transferring to the Los Angeles office. He continued acting in his free time but had to run every role, including scripts by corporate compliance. He landed his role on The Office after running into the show's casting director, who he had worked with previously, at a Farmer's Market. Nine months later he landed the job as fake CFO of Dunder Mifflin.

Andy Buckley Salary: With his tenure, it is presumable that Andy earns between $300 and $400,000 per year working in finance.