Andrew Levitas net worth: Andrew Levitas is an American painter, sculptor, filmmaker, writer, producer, photographer, and actor who has a net worth of $8 million. He grew up in Manhattan, New York and was a member of the downtown repertory company, City Kids, as well as a published writer. He attended New York University and graduated in 2000.

Levitas has a growing list of both American and international gallery exhibitions, and his work has garnished attention in top auction houses, museums, and art fairs. In 2004, he made a huge impact in the art world with his photographic sculpture exhibition, "Metalwork Experiment. In addition to his sculpture work, his "organic abstractions" paintings have also received critical acclaim. In 2012, Levitas directed the film, Lullaby starring Garrett Hedlund, Amy Adams, Jennifer Hudson, Richard Jenkins, Terrence Howard, Jessica Brown-Findlay, and Anne Archer, from his own screenplay. He has also produced films like The Art of Getting By, Affluenza, Bad Actress, Innocence, Regular Boy, Last Moment of Clarity, and At Any Price. In addition to his work in art and films, Levitas is also a part-tome faculty member at New York University and teaches a course on "The Artist's Mind. Levitas has been in a relationship with Welsh musician, Katherine Jenkins, since 2013 and the couple announced their engagement in April 2014. 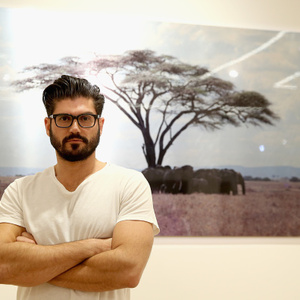