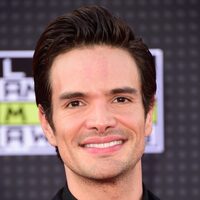 Andrés Zuno Net Worth: Andrés Zuno is a Mexican actor and singer who has a net worth of $1 million. Andrés Zuno was born in 1964 in Mexico City, Mexico. A series regular in over 100 episodes of television for Televisa and Telemundo, his breakthrough performance in the hit series Al Diablo con los Guapos (Down with the Beautiful) earned him the Best Supporting Actor Award for his role as Hugo. He went on to star in Pasión, Decisiones Extremas, the mini-series Mujer Casos de la Vida and Amar de Nuevo. Andrés Zuno is also a highly acclaimed musical theater performer, honored by the National Theatre Press Association as the Best Actor in a Musical for his performance as Emmanuel Milares. He also played the lead in the original cast of the hit Mentiras, el Musical (the longest running comedy in the history of Mexican musical theater). His film career began in 2004 with a supporting role, alongside well-known Mexican actor Rogelio Guerra, in Emisario del Odio (Messenger of Hate). That same year, he made his theatrical debut in Edward Albee's The Play About the Baby. This led to his role in Te Odio (I hate you), written by one of Mexico's most respected contemporary playwrights, Ximena Escalante, with renowned director Mauricio García Lozano. The trio went on to work together in the award-winning plays La Luna 100 Watts and El Códex Romanoff. Zuno then represented Mexico in the World Music Theater Festival in Holland, Belgium and Italy, starring in Unos Cuantos Piquetitos, a musical about legendary artist Frida Kahlo. It was the opening show of the festival and sold out each night. On March 2, 2010 Zuno won the APT Award, which is given by the theater press (Mexican Tonys) as the best leading actor in a musical for his work in Mentiras. In June of that same year, he released his first single as a solo pop singer.