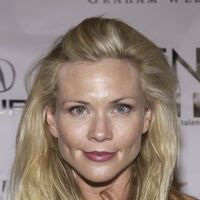 Amy Locane net worth: Amy Locane is an American actress who has a net worth of $100 thousand. She is known for her roles in the movies Cry-Baby and School Ties and the TV series Melrose Place.

Amy Locane was born in Trenton, New Jersey in December 1971. From 1984 to 1985 she starred as Andrea Winger on the television series Spencer. Locane starred as Sandy Louise Harling on the TV series Melrose Place in 1992. She starred as Allison Vernon-Williams in the movie Cry-Baby in 1990 and as Sally Wheeler in the film School Ties in 1992. Amy Locane starred as Alex Marshall in the 1994 movie Blue Sky and was nominated for a Young Artist Award for Best Performance by a Young Actress Co-Starring in a Motion Picture. She has also appeared in films including Airheads, Carried Away, Bram Stoker's Legend of the Mummy, The Heist, Secretary, and more.

Legal Problems: In June 2010 Amy was involved in a fatal car crash in New Jersey. She was driving 54 miles per hour in a 35 MPH zone when she crashed into a car that was turning into a driveway. The crash resulted in the death of a 60 year old woman. Locane's blood alcohol level was tested to be three times the legal limit. She was convicted of vehicular manslaughter in 2012 and initially sentenced to three years in prison. She was released in June 2015. A year later an appeals court ordered a review of the sentence. In February 2019 Amy was re-sentenced to five years in jail. That sentence was put on hold. In September 2020 she was sentenced to eight years in state prison after a judge agreed that her initial sentence was too light. She will be required to serve six years.