Amrish Puri Net Worth: Amrish Puri was an Indian actor who had a net worth of $20 million at the time of his death. Amrish Puri passed away in January 2005 at the age of 72. To Western audiences he is best-known for starring as Mola Ram in 1984's "Indiana Jones and the Temple of Doom". He appeared in more than 450 movies between 1967 and his death in 2005.

Amrish Puri was born in Lahore, Punjab Province, British India in June 1932. His older brothers are actors Chaman Singh Puri and Madan Puri. Amrish failed his first screen test and worked for the Employees' State Insurance Corporation. He became a well-established stage actor and won the Sangeet Natak Akademi Award in 1979. During his career Puri had more than 400 acting credits. His first screen role came in the 1970 film Prem Pujari. He worked in Hollywood, Hindi, Kannada, Marathi, Punjabi, Tulugu, Tamil and Punjabi films but was best known for his work in Bollywood. His best known roles came as Mola Ram in the 1984 movie Indiana Jones and the Temple of Doom and starring as Mogambo in the 1987 film Mr. India. Puri also starred as Khan in the 1982 film Gandhi. His final film was 2008's Mission: The Last War. Puri won three Filmfare Awards for Best Supporting Actor and two Best Supporting Actor award from the Screen Weekly Awards. 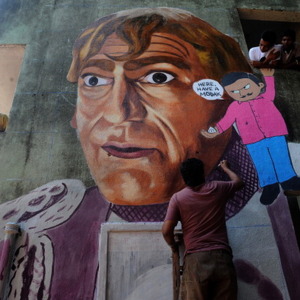