Ameesha Patel Net Worth: Ameesha Patel is an Indian actress who has a net worth of $30 million. Amisha Amit Patel was born in Mumbai, Maharashtra, India in June 1976. She started being trained as a Bharatnatyam dancer at five years old. Ameesha studied at Tufts University in Medford, Massachusetts. She became an economic analyst and turned down an offer from Morgan Stanley. Patel returned to India and acted in plays. She also became a model and appeared in advertising campaigns. Her first role came in the 2000 film Kaho Naa… Pyaar Hai. She has appeared in several Bollywood movies and Telugu films. Her role in the film Gadar: Ek Prem Katha in 2001 was critically acclaimed and was one of the biggest films in the Hindi cinema. For that role Patel won a Filmfare Special Performance Award. Patel started her own production company in 2011 called Ameesha Patel Productions. She is a frequent subject in Indian media regarding her relationship with the film maker Vikram Bhatt and her rift with her parents. Ameesha has also won Best Female Debut at the Zee Cine Awards, and Face of the Year and Best Actress at the Sansui Awards. 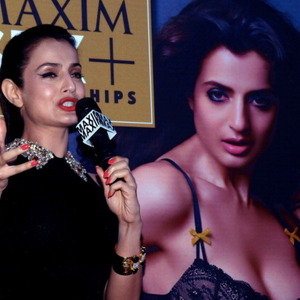