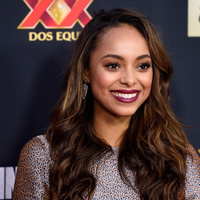 Amber Stevens net worth: Amber Stevens is an American actress and model who has a net worth of $3 million dollars. She is perhaps best known for playing the role of Ashleigh Howard on the ABC Family series Greek from 2007-2011. Stevens was born and raised in Los Angeles, where she continues to reside. Stevens is a graduate of Beverly Hills High School. Nu Talent Agency and Nous Model Management currently represent her. She is daughter of Shadoe Stevens, who is best known as the host of American Top 40 from 1988 to 1995. On December 24, 1989, Amber Stevens made a cameo appearance on American Top 40 as a part of a holiday skit. Stevens has a blog titled "Amber Eats LA: My Food Adventures in Los Angeles." Stevens has worked with better-known actors such as Bow Wow, Andrew Garfield, Emma Stone, Denis Leary, Martin Sheen and Sally Field. Stevens played Jonah Hill's love interest in the 2014 film 22 Jump Street, where she will also work alongside Channing Tatum, Peter Stormare and Ice Cube. Stevens had small television roles on series such as CSI: Crime Scene Investigation, Grey's Anatomy, Friends With Benefits, Baby Daddy, How I Met Your Mother, and 90210.