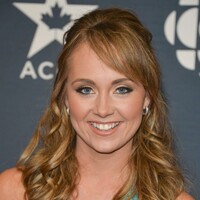 Amber Marshall Net Worth: Amber Marshall is a Canadian actress who has a net worth of $2 million. Amber Marshall was born in London, Ontario, Canada in June 1988. She is best known for playing the role of Amy Fleming on the TV series Heartland. Marshall first appeared in the TV series Super Rupert in 2000. In 2001 she appeared in an episode of the TV series Twice in Lifetime. In 2002 she appeared in episodes of Doc and Monk and starred as Lily in the TV movie The Christmas Shoes. Marshall also starred as Elizabeth Smart in the 2003 TV movie The Elizabeth Smart Story. In 2004 she made her feature film debut in Resident Evil: Apocalypse. She appeared in episodes of Dark Oracle in 2004 and the Power Strikers in 2005. Marshall's best known role has been as Amy Fleming in the TV series Heartland since 2007. She played the same role for the 2010 TV movie A Heartland Christmas. She has also starred in the short Travel Plans in 2011 and the movie Mutant World in 2014. Marshall won a Gemini Award in 2013 and was nominated for a Young Artist Award in 2004.