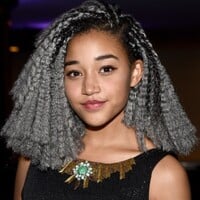 Amandla Stenberg net worth and salary: Amandla Stenberg is an American actress and voice actress who has a net worth of $2 million. Amandla Stenberg was born in Los Angeles, California in October 1998. She is best known for starring in the movies The Hunger Games and Colombiana. She started doing catalog modeling shoots for Disney at just four years old and has starred in commercials for Kmart and McDonald's. In 2011 she starred as Cat in the movie Colombiana and in 2012 as Rue in the film The Hunger Games. From 2013 to 2014 Stenberg had a recurring role as Macey Irving in the television series Sleepy Hollow. In 2014 she voiced the role of Bia in the movie Rio 2. Stenberg is scheduled to star as Halle in the upcoming television series Mr. Robinson. In 2012 she won a Teen Choice Award for The Hunger Games and she was also nominated for a Black Reel Award and an Image Award for The Hunger Games. In 2015 she attended prom with actor Jaden Smith.