Amanda Tapping net worth and salary: Amanda Tapping is a Canadian actress who has a net worth of $5 million dollars. She is probably best-known for her role on the sci-fi series "Stargate SG-1".

Born in Rochford, Essex, England, Amanda Tapping relocated to Ontario, Canada when she was a toddler. She graduated from the University of Windsor, where she focused on drama in the School of Dramatic Arts. She began her professional career working in the theater, and then began appearing in guest starring or co-starring roles in television movies and series, such as, "The Haunting of Lisa", "Remembrance", "Forever Knight", "Flash Forward", "Due South", and "The X-Files". She became a household name when she was cast as Samantha Carter on the hit sci-fi series, "Stargate SG-1". She was a main role actor in the cast from the series debut in 1997 until it's finale in 2007. She then appeared in multiple "Stargate" spin-off films and series. She produced and acted in the series "Sanctuary" which ran from 2007 to 2011. On and off between 2012 and 2018 Amanda guest starred on the CW series "Supernatural". 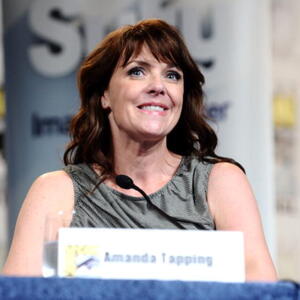