What is Amanda Holden's Net Worth?

Amanda Holden is a British actress and presenter who has a net worth of $12 million. Amanda Holden has enjoyed successful television and theater careers since the mid-90s, appearing on such television shows as, "EastEnders", "Goodness Gracious Me", "Kiss Me Kate", "Hearts and Bones", "Cutting It", "Mad About Alice", and "Wild at Heart". She also starred in "Thoroughly Modern Millie" and "Shrek: The Musical" in the West End. In addition to her acting work, she has served as a presenter/host for such programs as, "The Early Show", "Amanda Holden's Fantasy Lives", and "Lorraine". She is currently a judge on "Britain's Got Talent" and a host on "Heart Breakfast" radio show.

For a number of years, Amanda Holden's Britain's Got Talent salary was 700,000 pounds per season. That's the same as a little more than $1 million USD. In 2020, Amanda and her female co-host Alesha Dixon were stunned to learn that their male co-host David Walliams was earning 1.5 million pounds per season. More than double Amanda's salary and nearly 4x Alesha's salary. Upon learning of the pay discrepancy Amanda and Alesha demanded equal pay. Their other co-host, Simon Cowell, (who is also executive producer/creator of the show) subsequently agreed to increase their salaries to match Walliams' 1.5 million pounds per season. That's the same as $1.8 million per season.

Holden was born on February 16, 1971 in Portsmouth, Hampshire, England. She spent much of her childhood in Bishop's Waltham. She joined Bishop's Waltham Little Theatre Company when she was nine years old and began acting. She attended the secondary community school Swanmore College. She moved to Bournemouth when she was 16 and then relocated to South London to attend Mountview Academy of Theatre Arts.

Holden first appeared on television in 1991 as a contestant on the game show "Blind Date." Her first acting gig was in an episode of "In Suspicious Circumstances" in 1993. She then appeared in four episodes of "EastEnders" in 1994 and had a supporting role in "Intimate Relations" in 1996. In 1996, she appeared onstage in "Aladdin" at the Lyceum Theatre in Sheffield. In 1998, she appeared onstage in "The Importance of Being Earnest" and then onstage again in "The Sound of Music" in 1999.

From 2002 until 2004, she appeared as Mia Bevan in the series "Cutting It." One of her main roles came in 2006 when she booked a main character role in "Wild at Heart." She remained on the show until 2008. She also joined the show "Britain's Got Talent" as a judge in 2006 along with Simon Cowell, David Walliams, and Alesha Dixon.

In 2009, Holden appeared as Lizzie in the BBC circus sitcom "Big Top." From 2009 until 2014, Holden co-presented "A Night of Heroes: The Sun Military Awards." She also presented her own three-part series "Amanda Holden's Fantasy Lives" in 2010. In the show, she tried out three of her dream jobs. In 2010, she also co-presented "The Door" with Chris Tarrant. The next year, she narrated the documentary, "The Nation's Favourite Bee Gees Song" on ITV. In 2012, she guest presented an episode of "Lorraine." She later returned to guest present six more episodes of the show in 2016.

Holden presened the talent show "Superstar" in 2012. She also hosted an episode of the Channel 4 show "Dispatches" about the treatment for stillbirths and miscarriages in 2014. During the end of 2014, she filled in as co-host on "This Morning." She would fill in as host on the program numerous other times in the years that followed. In 2015, she was part of the presenting team for the ITV Christmas telethon "Text Santa." The next year, in 2016, she presented "I've Got Something to Tell You," a series on the W television channel.

In 2021, she appeared in the comedy mockumentary series called "The Holden Girls: Mandy & Myrtle." She also appeared in three episodes of "Neighbours" in 2022. She has also appeared on a judge in numerous other reality competitions like the "Eurovision Song Contest 2021," "I Can See Your Voice," and "Britain's Got Talent: The Ultimate Magician." 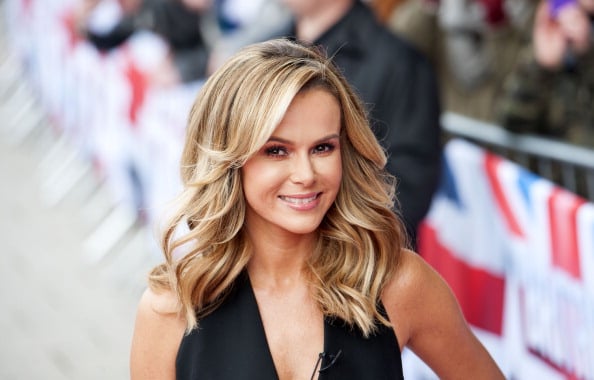 In 1992, Holden began dating George Asprey while they both were appearing on "The Sound of Music." They broke up and she then began dating the comedian Les Dennis. The two married in June of 1995. The couple separated temporarily in 2000 after Holden had an affair with actor Neil Morrissey. The story was very popular in the press and the couple separated permanently in December of 2002 before divorcing in 2003.

Holden then began dating Chris Hughes, a record producer. They had a child together in 2006 after they became engaged. They married at Babington House in December in 2008. The couple tried to conceive another child but Holden suffered a miscarriage in 2010 and then had a stillborn child in 2011. In 2012, after a complicated pregnancy, she gave birth to a daughter.

Holden has been involved in a number of charitable causes. She has been the spokesperson of a breast-cancer awareness campaign and is a patron of the football club's charity, Everton In the Community. In 2008, Holden ran the London Marathon in the name of the Born Free Foundation. She has also been involved with the RSPCA and has presented their Animal Hero Award since 2013. In 2013, she became a celebrity ambassador for Battersea Dogs and Cats Home. She also has worked for People for the Ethical Treatment of Animals (PETA) to highlight the poor treatment of orcas as SeaWorld.

In 2015 Amanda and Chris Hughes paid 3.5 million pounds for a mansion in Surrey. They sold this home in August 2022 for $5.3 million pounds. They also own a cottage in the Cotswolds.