What is Alyssa Milano's Net Worth and Salary?

Alyssa Milano is an American actress, producer and singer who has a net worth of $10 million dollars. Alyssa Milano became a household name in the 1980s with her starring role on the sitcom "Who's the Boss?". She appeared in several television movies in the 1990s, and starred in the television series "Charmed". Other notable roles of hers include the short-lived sitcom "Romantically Challenged" and the film "Hall Pass".

Alyssa Jayne Milano was born on December 19, 1972, in Brooklyn, New York City. Her parents are Lin Milano, a fashion designer and talent manager, and Thomas M. Milano, a film-music editor. Their family are of Italian descent, and she was raised Roman Catholic. Milano has a younger brother, Cory, who is younger than her by a decade.

When Milano was 7 years old, her babysitter took her to an audition for a national touring company of "Annie". This happened without Milano's parents' permission. Milano made it through the auditions, and was actually chosen for one of the four principal parts, beating out more than 1,500 other girls. While she was in the play, Milano and her mother traveled the United States with the touring company and were on the road for 18 months. Upon their return to New York, Milano began appearing in various television commercials, and also in different off-Broadway stage productions.

In August 1984, when she was 11 years old, Milano made her film debut in the drama "Old Enough". The film won First Prize at the Sundance Film Festival. She then landed the role of the daughter of Tony Danza's character on the sitcom "Who's the Boss?", and the show began airing on ABC in September 1984. To support her career, her whole family actually moved out to Los Angeles that year, where the show was filmed and produced. She starred on the show for 8 seasons, until it's end in 1992, for a total of 196 episodes. This role established her as a household name and teen idol, and opened up the opportunity for her to take on many more roles. For example, when she was 12 years old, she co-starred with Arnold Schwarzenegger in "Commando" (1985). On stage, she starred in productions like "Tender Offer" by Wendy Wasserstein; "All Night Long" by John O'Keefe; and "Butterflies Are Free" in Los Angeles (December 1991 – January 1992).

After a Japanese producer saw her perform, Milano was offered a five-album record deal. She ended up only releasing four studio albums: "Look in My Heart" (1989), "Alyssa" (1989), "Locked Inside a Dream" (1991), and "Do You See Me?" (1992). The general sound of the albums are described by Milano herself as "bubblegum pop", and she has been openly critical of their musical quality. Her musical career actually did not fare too badly overseas; she achieve platinum status in Japan. But she did not pursue a music career back in the United States, saying that she would "much rather have [her music] released where it's appreciated than laughed at". She continued to work on various projects, including producing a teen workout video "Teen Steam", as well as starring in things like the television films "Crash Course" (1988) and "Dance til' Dawn" (1988); and the independent film "Where the Day Takes You" (1992). In an attempt to distance herself from the "nice girl" image established by her work on "Who's the Boss?", Milano appeared in a number of erotic films like "Embrace of the Vampire" (1995) and "Deadly Sins" (1995). In these films, she appeared in several nude scenes.

From 1995 to 1998, Milano starred in seasons 5-7 of "Melrose Place", as the character Jennifer Mancini. After leaving "Melrose Place", she joined the cast of "Charmed" as the character Phoebe Halliwell. The show ran for 8 seasons, until 2006. In addition to starring on "Charmed", Milano also became a producer on the show beginning with the fifth season. She has gone on to appear on shows like "Mistresses" (2013-2014) and "Insatiable" (2018-2019). On top of her television work, Milano has also appeared in films like "My Girlfriend's Boyfriend" (2010) and "Hall Pass" (2011).

At the peak of her time on "Charmed", Alyssa earned $90,000 per episode which worked out to around $2 million per season. 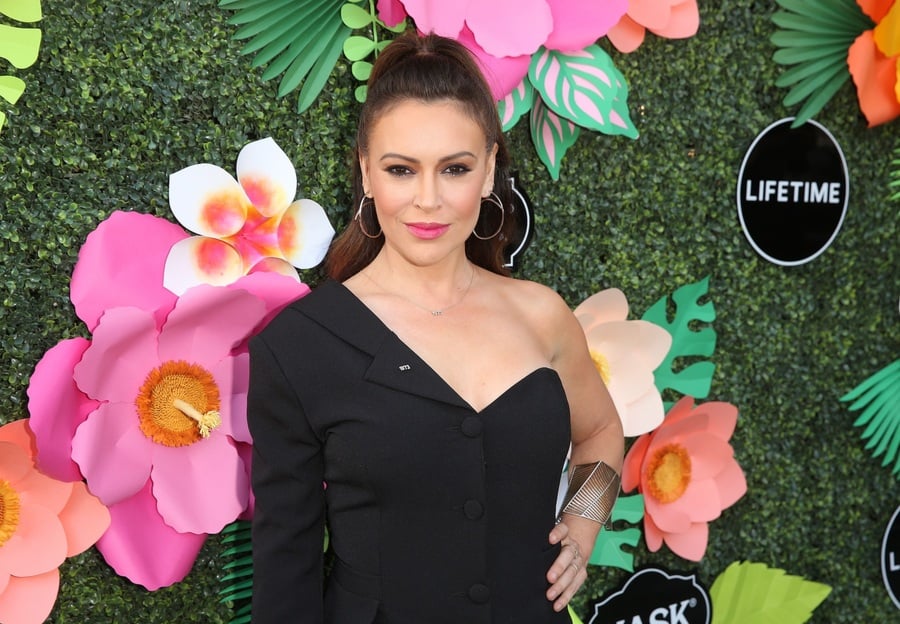 From 1987 to 1990, Milano was in a relationship with the actor Corey Haim, who struggled with addiction throughout the duration of their relationship. Supposedly, Milano and his manager tried unsuccessfully to get him professional help. In 1993, she became engaged to fellow actor Scott Wolf. However, they ended their engagement and separated just a year later. She revealed in 2019 that, despite being on birth control at the time, she had actually gotten pregnant with Wolf and undergone two abortions in 1993 while they were still together. In 2008, Milano became engaged to David Bugliari, an agent at Creative Artists Agency, after a year of dating. They got married at Bugliari's family home in August 2009. Together, they have two children, a son born in August 2011, and a daughter born in September 2014.

In 2017, Milano sued a former business manager who reportedly left her millions of dollars in debt and ruined her credit. Milano sued her accountant for allegedly allowing the costs of a home renovation to soar to $5 million. After the renovations, the home was worth $3 million. Milano was under the impression her finances were perfectly fine and turned down lucrative acting roles, but in reality she and her husband were millions of dollars in debt. Her accountant reportedly failed to make payments to the IRS which led to millions of dollars in penalties and unpaid taxes. She further alleged that the accountant forged her name to make bad investments in things like a parking lot. In the wake of the financial problems, Milano put her $2 million West Hollywood condo up for sale.