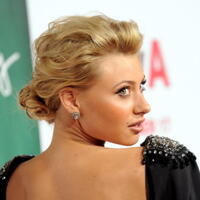 Alyson Michalka net worth: Alyson Michalka is an American actress and recording artist who has a net worth of $2 million dollars. Alyson Renae Michalka was born in Torrance, California in March 1989. Her sister is Amanda "AJ" Michalka. Alyson started playing the piano at five years old and the guitar at 13. She started acting at five in church plays. Her first role was as Keely Teslow on the Disney Channel's Phil of the Future from 2004 to 2006. She starred in the Disney Channel movies Now You See It… and Cow Belles. Alyson starred as Marti Perkins in the TV series Hellcats in 2010 and 2011. She has had a recurring role as Brooke on Two and a Half Men. She has appeared in the films Grown Ups 2, Easy A, and The Roommate. Alyson and her sister AJ make up the musical duo 78violet which was formerly known as Aly & AJ. Their released their debut studio album Into the Rush in 2005. In 2006 the duo released a holiday album. Their third album Insomniatic was released in 2007 and featured the hit single "Potential Breakup Song". She has been nominated for a Young Artist Award, American Music Award, and Teen Choice Award. In 2014 she became engaged to Stephen Ringer.