Ally Sheedy Net Worth: Ally Sheedy is an American actress and writer who has a net worth of $4 million. Sheedy accumulated her net worth through her performances on stage and in film and television projects, as well as being the author of the books "She Was Nice to Mice" (1975) and "Yesterday I Saw the Sun: Poems" (1991). Ally first rose to prominence as a mischievous teen who, along with computer nerd Matthew Broderick, almost triggers World War III in "WarGames" (1983). Two years later, she made two other notable performances, as a misfit spending one day in detention in the John Hughes classic "The Breakfast Club" and as a headstrong Gen-Xer in the post-college drama "St. Elmo's Fire." The three blockbuster movies earned Sheedy, among other things, a membership in the so-called "Brat Pack," an exclusive clique of young, rich, and famous actors like Emilio Estevez, Molly Ringwald, Judd Nelson, and Rob Lowe, in the 1980s.

However, just as her career peaked in the '80s, it practically fell into complete obscurity the following decade. After spending a period in the dearth of second-rate movies and TV shows, Sheedy started to shine brightly in the Hollywood sky once again with her award-winning portrayal of heroin-addict and photographer Lucy Berliner in the independent movie "High Art" (1998). Once she was propelled back into the limelight, Sheedy went on to star in numerous TV projects throughout the 2000s, including a memorable four-episode stint on the USA network series "Psych" (2009–2010; 2013) where she played a serial killer known as Mr. Yang.

Early Life: Ally Sheedy was born Alexandra Elizabeth Sheedy on June 13, 1962, in New York City. Her mother, Charlotte, was a writer and press agent, and her father, John, worked as an advertising executive. Ally's parents divorced in the early 1970s, and she has two siblings, Meghan and Patrick. Sheedy attended the Bank Street School for Children and Columbia Grammar & Preparatory School and graduated in 1980. At age 6, she began dancing with the American Ballet Theatre, and she originally wanted to pursue a career as a dancer. Ally later decided to pursue acting instead, and she studied with Harold Guskin. At just 12 years old, Sheedy wrote a book, "She Was Nice to Mice," which became a best-seller after it was published by McGraw-Hill Education, and she appeared on "To Tell the Truth" in 1975. Ally moved to Los Angeles when she was 18 years old, and she enrolled at the University of Southern California to study drama. She began her acting career while attending college and completed three years' worth of the courses she needed to earn a BFA degree in acting.

Career: Sheedy began acting as a teenager, first appearing in local theatrical productions, then she was cast in several 1981 TV movies, such as "The Best Little Girl in the World" and "Splendor in the Grass." She made her big screen debut in 1983's "Bad Boys," and that year she also starred in "WarGames" and guest-starred on three episodes of "Hill Street Blues." Ally then co-starred with Emilio Estevez, Anthony Michael Hall, Judd Nelson, and Molly Ringwald in 1985's "The Breakfast Club," which was preserved in the Library of Congress' National Film Registry in 2016 because it is considered "culturally, historically, or aesthetically significant." In 1985, she also appeared in the films "St. Elmo's Fire" and "Twice in a Lifetime," then starred as Stephanie Speck in "Short Circuit" the following year. In the 1990s, Sheedy appeared in the films "Only the Lonely" (1991), "Man's Best Friend" (1993), and "Highball" (1997) as well as several TV movies, including "Chantilly Lace" (1993), "Parallel Lives" (1994), and "The Haunting of Seacliff Inn" (1994). She earned critical acclaim for her performance in 1998's "High Art," and in 1999, she became the first cis-gender female to play the title role in the musical "Hedwig and the Angry Inch."

Personal Life: Ally briefly dated musician Richie Sambora in the 1980s and has said that the relationship led to drug abuse. Sheedy sought treatment at the Hazelden Foundation in 1985, and she was treated for an addiction to sleeping pills in the 1990s. Ally married actor David Lansbury, Angela Lansbury's nephew, on April 12, 1992, and they have a transgender son named Beckett (born March 15, 1994). Sheedy and Lansbury divorced in 2009. During the Golden Globes in January 2018, Ally called out James Franco in a #MeToo tweet and stated "James Franco just won. Please never ask me why I left the film/tv business." She later removed the tweets, and on an episode of "The Late Show with Stephen Colbert," Franco said, "I have no idea what I did to Ally Sheedy. I directed her in a play Off Broadway. I had nothing but a great time with her, total respect for her. I have no idea why she was so upset." 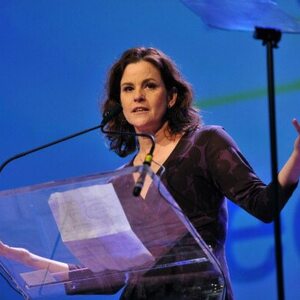